If you believe the statement of ‘part-time jobs require real ability! Respect part-time workers,’ CGV can be a good example of this in practice. There are greeters and assistants who always smile, deliver discount card information to customers, quickly deliver concession food, and kindly help people find their seats in a movie theater. If you are able to experience the uniquely different services from them, you will naturally give them a ‘thumbs up’! I met greeter Yoo-rim Won and assistant Doo-il Yang who are practicing customer service at CGV Gangnam with an extraordinary view on an occupation that transcends part-time work.

The ‘Dream’ of an opportunity opened up by CGV 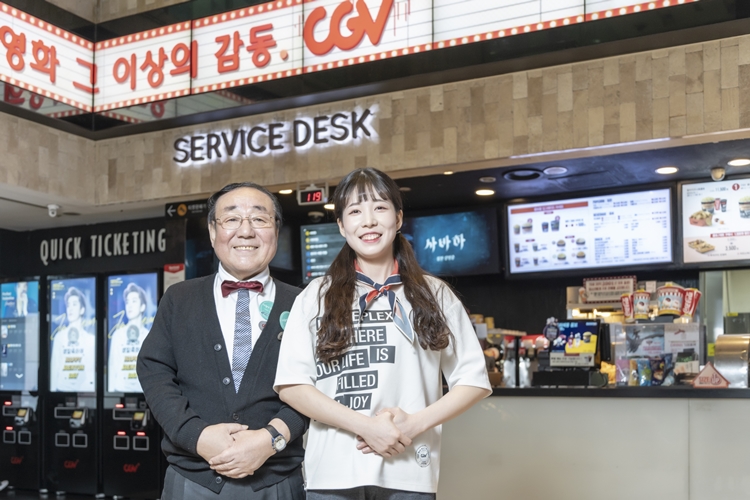 With a service mind delivering delight and happiness to customers, greeters and assistants can be found working at each CGV branch. As they receive various benefits, such as 10 free movie tickets a month, photo tickets, discounts on concession food, four major social insurances, transportation expenses if they leave work after closing and retirement benefits for employees who worked for more than a year, it is known as ‘one of the best part-time jobs’ among the young generation in their 20s and senior citizens in their 60s. As a result, there are many applicants. How did Won, who started working as a greeter at CGV Jukjeon in 2015, and moved to CGV Gangnam in 2017, begin to work at CGV? 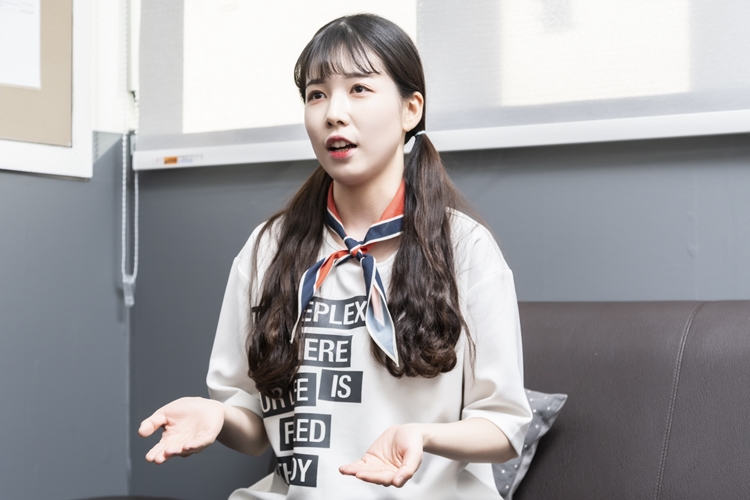 I wanted to become a CGV greeter from a long time ago. As soon as I became 20 years old in 2015, I applied for a position in CGV Jukjeon, and I luckily got the job.

She bashfully claimed that she was lucky, but her experience with various part-time jobs, such as Tous Les Jours and a wedding hall, and her sincerity had a great influence. When she interviewed for a position at CGV Gangnam after moving to Seoul, she said she never missed a shift while working at CGV Jukjeon, and got the job. She is now a distinguished member of the staff at CGV Gangnam.

Assistant Yang worked as an English instructor and operated an English academy for a long time, but retired in 2012. He had a good rest for a few months as if to reward himself for his hard work over a long period of time, but he says he was aching to work again. While receiving training related to senior jobs in a nearby welfare center, he learned about CGV assistants, and applied for a job at CGV Gangnam as soon as he saw a job posting in 2013.There were 8 applicants for 2 positions. He said that education is a kind of service too, and he was ready to serve customers and emphasized his sincerity. His eyes burned with the desire to work again, and as a result, he got the job. Initially, he faced physical difficulties, but as he got used to his work, he gained confidence, and he has since worked for 7 years without any absence from work. He is becoming an essential member of the movie theater. You will never know how happy I am when I wake up in the morning upon realizing that I get to go to work. That’s why I am still working hard here.

We need both a good memory and mind reading ability?
Greeters and assistants have to do more work than you can imagine. For example, their duties are largely divided into the ticket box (selling tickets), the sweet box (concession stand) and the floor (information on the screens and management). At the ticket box, they sell tickets, handle discount cards and provide basic movie information. At the sweet box, their main duty is to quickly cater to customers’ needs, and on the floor, they help customers enter and leave the movie theater, and they also manage the screens and clean the movie theater. They work 40 hours or less a week, and 6~7 hours a day on average. Greeter Won works at the ticket box and the sweet box, whereas assistant Yang takes care of the floor. As the number of customers who print their tickets at the kiosk after making reservations is recently increasing, the number of tickets sold at the ticket box have lessened, but still, a lot of people are asking questions about discount cards. What a greeter in charge of the ticket box needs is a good memory. Greeter Won memorizes discount card information, which is used quite often, to quickly answer customers, and for other questions, she delivers correct information after asking a senior greeter or manager. She never forgets to memorize changes to ticketing at the morning meeting. Recently, she is quickly answering questions about how to use the kiosk and the photo ticket. She has almost become a true ticketing professional.

At the sweet box, she places emphasis on speed. To prevent customers from missing the first part of the movie because of backed up orders at the concession stand, she works more expediently and accurately. She never forgets to provide basic service like the cash receipt. As the ticket box or the sweet box is the first place that customers visit, she tries to wear a bright smile and always be kind. In recognition of these efforts, she received the excellent greeter scholarship in the second half of 2018. 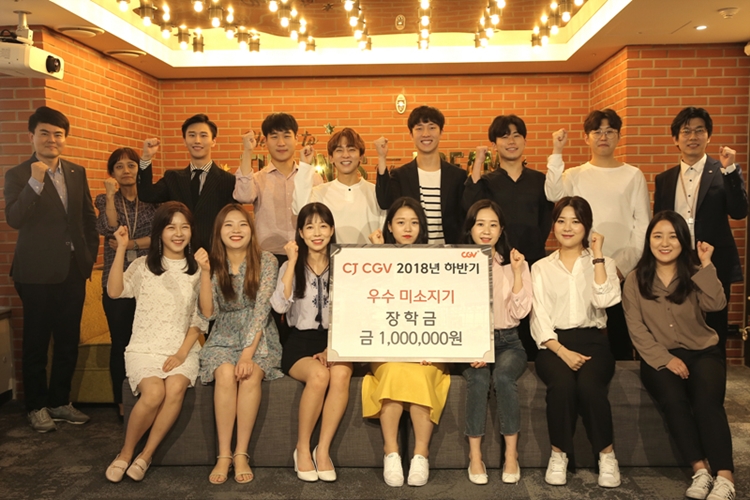 I was surprised that I could be rewarded like this. I just worked hard with a sense of ownership.

I was also moved by the fact that my efforts paid off. I think I made the right choice to become a greeter. (laughter)

When he arrives at work, assistant Yang, who usually performs floor duties, also looks at the time table with the admission and exit times and checks the screens he is in charge of after the daily morning meeting. At CGV Gangnam, there are a total of 6 screens, two on each floor, so he repeatedly goes up and down according to the time table. He checks the tickets at the entrance, checks if the movie is well projected, and radios the manager. When the movie ends, he greets customers on their way out, quickly cleans the floor, and then makes preparations for the next customers. Assistant Yang, who has taken care of the floor of CGV Gangnam for 7 years, displays his know-how at the admission time. Seeing customers on the escalator, he uses his own face and body language reading technique to tell whether they are loving couples or if they are awkward with each other, and how long they have been dating each other. Couples who haven’t been out on a date for a long time do not often hold hands. In a situation like this, he makes an offbeat comment as they enter to create a pleasant atmosphere, and induces them to hold hands naturally. Seeing a smile on the faces of the customers when they enter is his real joy and reward.

Utmost service based on collaboration and a sense of responsibility

Greeters and assistants are not always happy or having fun. They say with one voice that they both cry and laugh because of customers. When they meet tough customers, they feel worn out after. Nevertheless, they say they can provide the best service for customers because of those who say, ‘Thank you’ or ‘Good job,’ and because of their colleagues who share the hard work. ▲ The best teamwork: helping each other during busy hours like weekends

Collaboration with colleagues is so important. In particular, at CGV Gangnam, located in an area with a large floating population due to its local characteristics, there are a lot of customers from 1:00pm to 8:00pm on holidays. During busy hours, they stick together and help each other out. Everyone says that it will be strange if the tickets are not sold out. They are full of confidence. While working together for a long time, they built trust and confidence, and as they talked with each other oftentimes, they became friends. In particular, assistant Yang overcame the age difference, and gave advice on schoolwork and careers to greeters as a person who has more experience in life. As a result, he made close connections with them. Greeter Won says his advice has been very helpful.

They look like a grandfather and a granddaughter together, but as colleagues displaying the best teamwork in the movie theater, they deliver the best service to customers. They will continue to serve the customers visiting CGV Gangnam. They were really busy in February because of the customers’ enthusiasm for ▲ Welcome to CGV Gangnam. Have a good time!

I will do my best and never lose my original intentions.

If I have a chance, I’d like to work at CGV for a long time as a greeter.

This coming May, I will have worked here for 6 years. If my health permits, I’d like to work here for 10 years, and I will do my best so that I won’t let down other assistants around the country.

CGV will celebrate its 21st anniversary this year. Due to advances in technology, the movie-going culture is greatly changing, but one thing never changes. And that is the service mind of greeters and assistants. Their efforts to give happiness and good memories to customers are the source of the positive image of CGV, and the driving force behind its success. The unchanging service of greeter Yoo-rim Won and assistant Doo-il Yang, who simply want to bring joy to customers, will continue in the future.

Next
What’s the secret behind products that trigger impulse buying? CJ Foodville