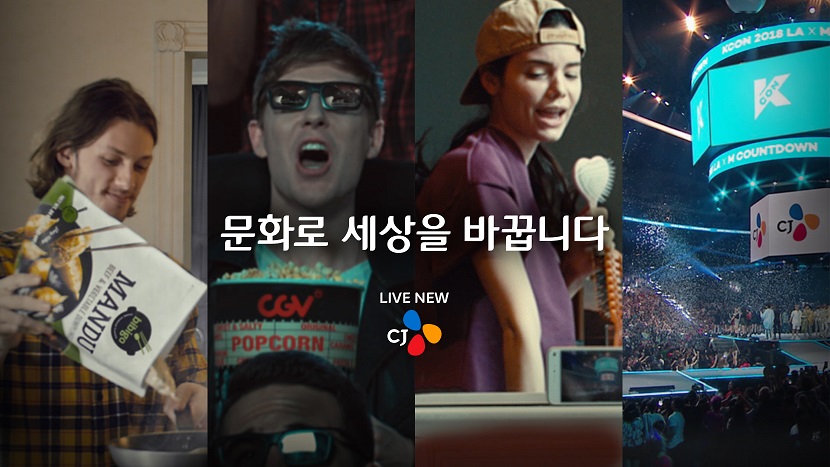 How far does the power of the culture made by CJ Group reach?

As CJ Group has been able to convey stories about [What CJ Group does] through the ‘We make culture’ campaign over the past few years, this new campaign goes beyond forming culture and delivers stories about what values the culture made by CJ Group has and how it is changing global lifestyles.

Culture has the power to change the world

Korean HMR bibigo has established itself in the food of America, the paradise of fast food, in place of hamburgers, and the citizens of France, which holds the Cannes Film Festival every year, are experiencing movies through 4DX, while people around the world are now going crazy about KCON, as it spreads K-Culture.

It can be said that these cases of forming a new global lifestyle and changing it in various ways underscore that the power of the cultural business of CJ Group can go beyond a single corporation and become a new growth engine of Korea.

This campaign is using a creative approach that starts with bibigo in the US, and connects spaces and continuously shows 4DX in France and KCON, which is widely enjoyed by people around the world. Consumers watch ads and become captivated by them, and naturally begin to understand the key message, ‘We change the world with culture,’ through the images of CJ brands.

The stories about CJ Group do not end here.

Tous Les Jours is emerging as a hot place in Vietnam, a country of rice noodles and bánh mì, and you can check stories about MAMA, where the whole world goes wild for Korean music awards, in the global version, not the local version.

Let’s look forward to CJ Group transforming global lifestyles in such diverse ways that cannot be easily summed up in a single ad.