From sponsoring players to attracting THE CJ CUP! We met up with Yoo-sang Kim

CJ is doing well on the global stage, such as by connecting people around the world with K-Contents and enhancing the status of Korean food. Now, CJ is expanding the domain to include` sports. This coming October, the second THE CJ CUP, hosted by Jeju Nine Bridges, is the iconic example. What is it that made it possible to host a PGA tournament in Korea, which everyone thought impossible? We were able to hear the answer from Yoo-sang Kim, in charge of THE CJ CUP. And of course, stories about sports marketing too! 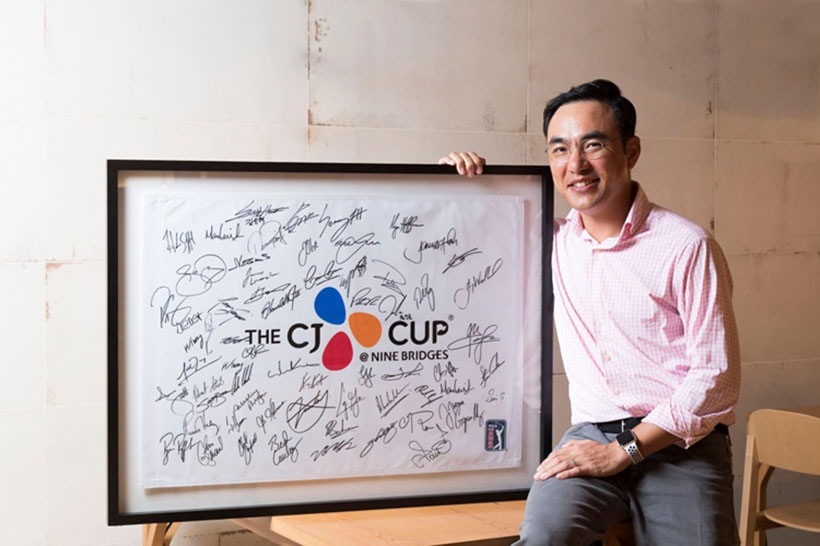 - A sports-loving boy grows into a marketing expert

From childhood, he was in love with sports. He was so athletic that he participated in the selection contest for the National Junior Athletic Competition, but realizing that he could not possibly become an athlete, he chose public administration as his college major. At school, he naturally gravitated towards sports, and he began to think if he could do something related to sports even though it is unrelated to his major. No matter how much the times have changed or will change, he was convinced that sports cannot be replaced by machines or robots. 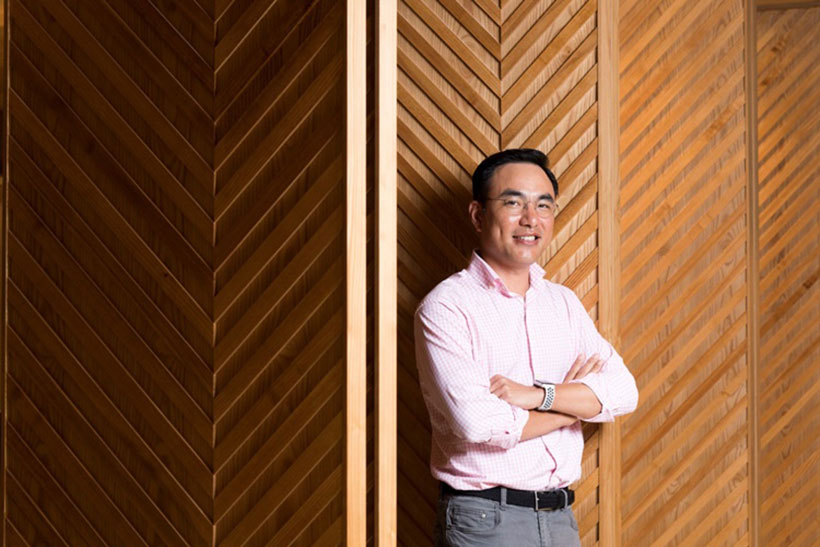 "The underlying meaning of perspiration is something that only people can sense, and only people can feel the fun of, so I felt that sporting events and Olympics would not disappear, and at that time, I was a college student, but it dawned on me then that this field was a blue ocean."

At that time, sports marketing was quite unfamiliar to people in Korea. So he decided to go to the US to study it. There, he studied and gained all kinds of sports-related experience with intramural football, women’s volleyball and women’s soccer, from supporting promotional events to ticket sales, and developed his competency as a marketer. In 2006, when he was about to finish his graduate studies, he joined CJ, which was readying a business related to sports marketing. He has been working for CJ for 13 years.

After starting to work at CJ, his first job as a new sports marketer was athlete sponsorship. CJ was engaged in a total of three businesses, such as motor sports, e-sports and golf, and he was put in charge of the golf part. His job was to sponsor top Korean athletes like Se-ri Park and Kyeong-eun Bae.

He said that CJ’s sports marketing is doing a lot of things. Among them, the most basic is athlete sponsorship. If there is a very real possibility of shared growth, it sponsors any athlete no matter how unknown the sport is. Of course, golfer Se-ri Park whom he was in charge of first was an exception. When CheilJedang was renamed CJ, the company sponsored her to enhance the public awareness of the company as a global brand. Except such special cases, the philosophy of CJ Sports Marketing is to find promising players and give them maximum support to expand their possibilities and grow with them. 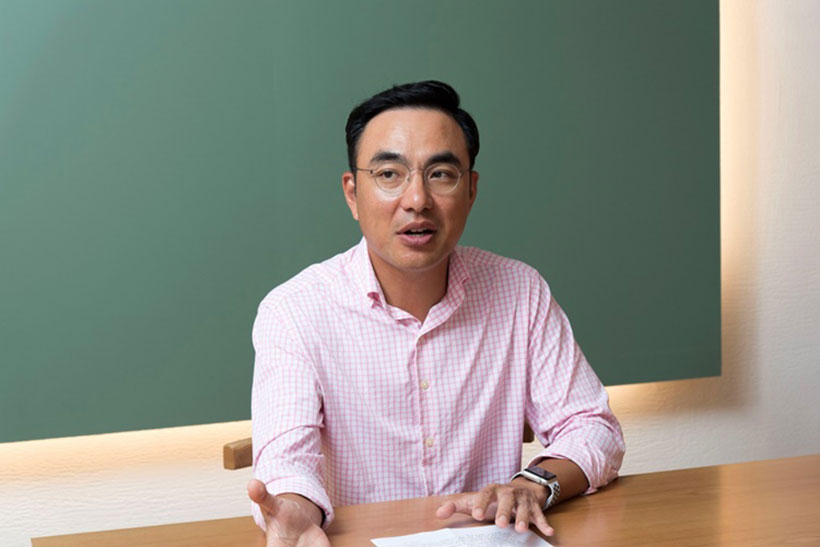 He cited professional golfer Si-woo Kim as a perfect example. CJ has continuously watched the growth of Kim, who distinguished himself in middle and high school competitions, engaged with him, and made efforts to find an opportunity to sponsor him. As a result, Kim has been with CJ for six years, and last year, he won the US PGA Tour Players Championship at the youngest age ever. It was a moment when the philosophy of CJ Sports Marketing, i.e. shared growth, really shone through.

At first, most of the sponsored athletes were golfers, but now CJ is expanding the range to include relatively low-profile sports. In particular, the company is sponsoring winter sports and extreme sports athletes, and snowboarder Ho-jun Kim was sponsored by CJ from the start of his career till he retired after the Olympics. At the last PyeongChang Winter Olympics, Sang-ho Lee won the silver medal in snowboard alpine, and skeleton racer Sung-bin Yun won the gold medal. CJ is also sponsoring tennis players. Yun-seong Jeong is the prototype tennis player sponsored by CJ. Although tennis is a major sport in the world, Koreans have not been very good. So CJ is deeply considering its potential. 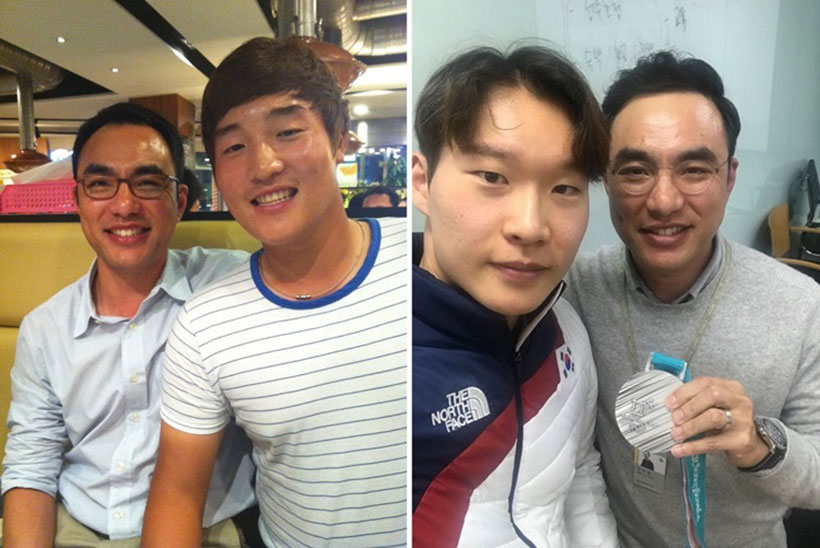 ▲ Yoo-sang Kim, who believes that trusting and rooting for players regardless of their performance is most important, can be seen with players sponsored by CJ (from left) professional golfer Gyeong-hun Lee and snowboarder Sang-ho Lee.

CJ is continuously making social contributions through sports. At present, CJ is sponsoring the members of the national female Taekwondo team of Vietnam, which offers little support for sports. Starting with the dispatch of promising instructors from Korea, the company is not sparing any support in consideration of off-season training and the athlete's village. Their skills are improving so much that they can be expected to win medals at the upcoming Asian Games and Tokyo Olympics. “By supporting the members of the Vietnamese national team, we believe that we are making contributions as a country and as a company. At any rate, Taekwondo is really the national sport of Korea, isn’t it?” He says he is proud that CJ Sports Marketing is sponsoring athletes, and conducting sports diplomacy, i.e. promoting Korea on the global stage.

- THE CJ CUP brought about a miracle with a simple email!

Yoo-sang Kim is also in charge of Korea’s first regular PGA Tour competition, THE CJ CUP. We were able to hear detailed stories from him about the most iconic event of CJ Sports Marketing. 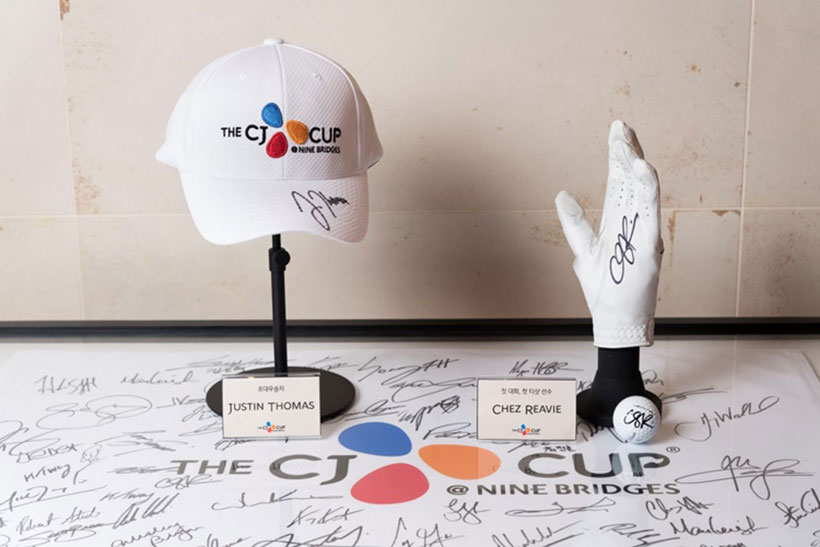 ▲(from left) The first champion Justin Thomas, and the souvenirs of Chez Reavie who teed off first

This championship, hosted by CJ, dates back to 2002. CJ hosted the US Ladies’ Professional Golf Association (LPGA) Tour championship for the first time in Korea. It is known as CJ Nine Bridges Classic. At this championship, Korean female golfers competed with world-class golfers, and dreamed of playing in the US. Then, for three years from 2011, the company hosted CJ International together with Kyung-ju Choi. While sponsoring golfers, and conducting various events, CJ has been thinking about how to leverage a great platform, Nine Bridges, which is a world-class golf course, into becoming a global enterprise. A regular PGA Tour championship was considered, and the company began to examine the possibility. Of course, no one had any expectations about its potential. Most sponsors want to host a golfing event. If so, from where was this possibility realized?

"In 2015, I went to a major championship called PGA Tour - The Open Championship, and made contact points with the officials. I sent an email to one of the officials asking for a meeting. Later, I learned that it was PGA Tour Chairperson Tim Finchem. (laughter)"

Yoo-sang Kim got this great opportunity and had a meeting. He clearly said to PGA Tour, “We want to host a PGA Tour championship in Korea.” He presented solutions to realistic problems, and proposed alternatives, and expressed a strong will to do so. So they began to explore the possibility in earnest. After talking with PGA Tour for more than a year and a half, CJ was finally able to host the first THE CJ CUP in 2017.
After successfully hosting the first championship, it received favorable reviews at home and abroad. Although it was the first championship, everything went fine. In particular, when he visited international competitions, he said he could often hear players and agents talk about the player protocols, services provided to players and efficient game management, and mention THE CJ CUP as a championship they want to participate in. He also said that the lineup of players will surely get better for the second championship, which will be held this coming October.

He said the biggest elements of a championship are the players, the gallery and sponsors. As a person in charge of CJ Sports Marketing, he is attracting and managing big championships. So he is aiming at services that will satisfy everyone. He is making efforts to make up for what the first championship lacked, and further reinforce what received a favorable review. For example, he is paying attention to small details like the gallery stands, the number of bathrooms, amenities and traffic flow, and he said he is planning to upgrade customized sponsor services. Compared to last year, CJ began to prepare for the competition almost three months earlier for the second championship, which is now just about two months away. He said he is planning to find what they might make a mistake about or they may neglect together with all team members, and check them again. 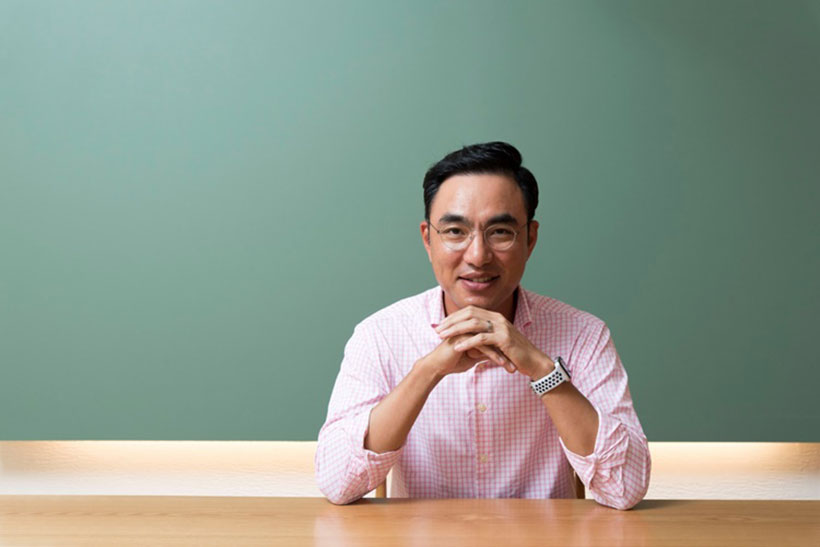 A sports marketer who joined the company 13 years ago. Hearing about his history, he does look like a marketer and operator. He says the most rewarding moments he had while working in one field for a long time are when his conviction about the players and teams he trusted did not prove to be all for not, and when it is proven that his instincts were not wrong. He went through a lot of moments together with players, and has grown with them.

The same can be said about attracting PGA Tour championships. He laid the foundation for Korean players’ advance into global markets. He also attracted the PGA Tour’s interest in the Asian market, including Korea and Japan, He is very satisfied with it all and he feels rewarded in terms of business and also personally. He says there are still many things to do in sports marketing. What kind of vision does he have?

"As the lifestyles of people are diversified, interest in bike riding, tennis and golf is on the rise. Industries related to sports will gradually expand. My vision is none other than making THE CJ CUP get attain the same heights of major championships around the world. This is my vision."

He added that he would like to set an example for his juniors who are dreaming of sports marketing in Korea. THE CJ CUP will start on October 18. Then, what big picture is he drawing up? I am already curious about the business of CJ Sports Marketing that he will create together with CJ.

Next
‘ScreenX’ is a new innovation and driving force for the movie industry!