On December 30, CJ CGV opened its 100th movie theater in China, ‘CGV Shanghai Bei Waitan,’ in the Baiyulan Square in Shanghai, China. Shanghai is the place where CJ CGV opened its first global multiplex, CGV Shanghai Daning, back in 2006. 11 years after its entry into China, CJ CGV now has 100 multiplexes, gaining a foothold for yet another bold leap forward. 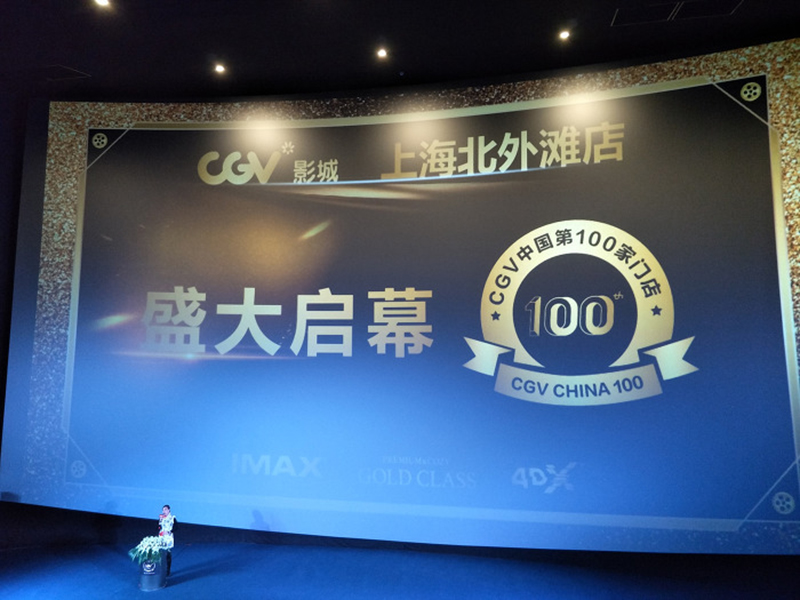 CGV Shanghai Bei Waitan is the 6th multiplex that CGV opened in Shanghai. It has 1,330 seats in 8 movie theaters, including 4DX, IMAX and Gold Class. Under the theme of ‘Cultureplex,’ which the company has continuously worked on, it is expected to establish itself as a premium movie theater brand by offering various special theaters and high-class services.

It is also noteworthy in that CJ CGV has gained the competitive edge in commercial power. The Baiyulan Square, where CGV Shanghai Bei Waitan is located, is one of the core business districts planned by the Shanghai municipal government. It is forecast to become a landmark of Shanghai in the future. As it is close to the International Passenger Terminal (port) and a metro station of Line No. 12, it features excellent accessibility. As 5-star W Hotel is situated in the vicinities, and luxury houses and office buildings will be constructed on an ongoing basis, they are expected to create synergies with the premium brand image of CGV.

With the opening of this multiplex, CJ CGV has a total of 100 multiplexes with 793 screens in 48 cities, including Shanghai, Beijing, Guangzhou and Shenzhen, and has laid the foundation for even bigger growth through the economy of scale.

- CGV’s own differentiation strategy is working 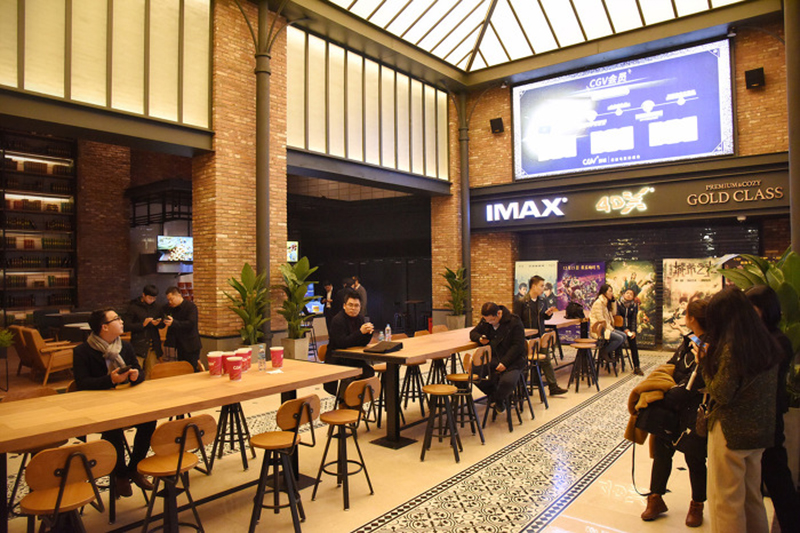 ▲ A panoramic view of the lobby of CGV Shanghai Bei Waitan

According to China’s entertainment research service center EntGroup, CJ CGV is the 7th largest business operator in terms of box office in China as of the end of 2017. It is astounding that it has been able to climb 15 places from 22nd at the end of 2012. Its market share also increased from 2% at the end of 2014 to 3%. Given the fact that more than 300 multiplex operators are fiercely competing in the Chinese market, its growth has been nothing short of amazing. In terms of sales per screen, an indicator of the efficiency of theater operations, it is the unquestioned leader among the top 10 multiplexes in China. This underscores how excellent CJ CGV is in attracting customers to its theaters.

43 million people visited CGV in 2017. Compared to 37 million in 2016, it is clear that it continuously sees notable growth. If this trend continues, it is on track to attract more than 50 million viewers this year. Above all, the biggest change is the fact that it pulled itself out of the red, and created a stable revenue structure. In 2016, 63 multiplexes of CGV China recorded KRW 280 billion in sales and KRW 5.5 billion in operating profit. In 2017, it is expected to generate KRW 320 billion.

CJ CGV distinguished itself in China because not only did it grow quantitatively, but also its premium differentiation strategy based on the 'Cultureplex' took effect. Based on its know-how of operating movie theaters, which it honed to perfection in Korea, CGV has continuously sought to combine it with various cultures with the aim of realizing Hallyu in movie theaters all over China. Also, the company opened ‘CGV UNIVERSITY,’ an educational institution teaching movie theater operations, which started in Korea, to raise local service levels, and has been concentrating on spreading special movie theaters based on various technologies, such as 4DX and ScreenX.

CGV’s own differentiation strategy made a strong impression on major investors in China. Strategic partnership with them will prove to be the driving force for even more rapid growth in China down the road. "As CGV China opened its 100th multiplex, we can expect accelerated growth based on economy of scale," said Jang Gyeong-Soon, senior director of CJ CGV China. “This year, we will seek to preempt the Chinese market and stabilize the business early on, and move quickly toward our goal of becoming one of the top 5 movie theater operators in the country.”

Next
CJ CGV, over 4 million monthly viewers in Turkey