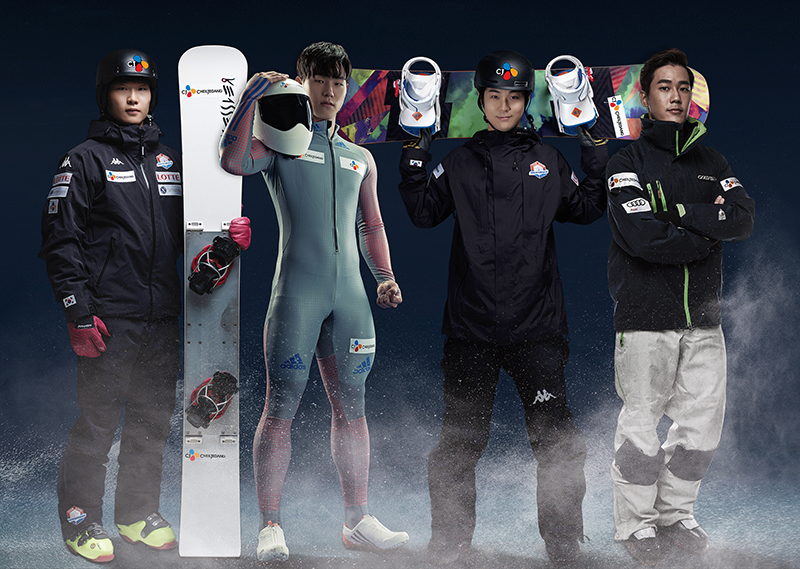 CJ CheilJedang, an official supporter of ‘2018 Pyeongchang Winter Olympics,’ actively commences sponsorship activities. By sponsoring this event, CJ CheilJedang is planning to promote its meaningful intent of winter sports sponsorship, which has been ongoing since 2010, and capitalize on the representative global Korean food brand ‘bibigo’s dumplings to intensively promote K-Food around the world.

CJ CheilJedang is sponsoring ‘2018 Pyeongchang Winter Olympics’ as part of its winter sports sponsorship which has continued since 2010. CJ CheilJedang is increasing its support for snow sports, which include snowboarding, and sliding sports, such as skeleton, based on CJ Group’s sports talent development and CSV management philosophy, including ‘Dreamers’ program. The company is also sponsoring this event in effort to contribute to the development of Korean winter sports.

- Planning on various activities wishing for the success of the Olympics

CJ CheilJedang is planning to intensively promote the representative global Korean food brand ‘bibigo’ through this sponsorship. As ‘2018 Pyeongchang Winter Olympics’ is a global sports event, as many as 50,000 sports officials from various countries are expected to participate in it, including more than 6,500 athletes from 95 countries.

In particular, as ‘bibigo’s dumplings will be exclusively supplied to the cafeterias and snack bars in various stadiums, and served to athletes, it will be an opportunity to effectively promote the Korean food among Olympic participants as well as athletes. CJ CheilJedang sponsored THE CJ CUP last year, and promoted Korean food through a world-class sports event. As a result, expectations are even higher now.

The company also prepared various marketing activities outside of the venue. During the Winter Olympics, it is planning to install the ‘bibigo Tasty Road to Pyeongchang’ booth at Oak Valley Resort in Wonju, and introduce menu features using ‘bibigo’ products so that people will have an opportunity to experience the Korean food. During the event, about 100,000 foreigners are expected to visit Oak Valley Resort. It will go a long way in reinforcing the image of the representative global Korean food brand and enhance its overall awareness.

CJ CheilJedang will also carry out the ‘Cheer Up’ campaign to help root for athletes. To give athletes extra strength, the company will provide the ‘Cheer Up Food’ pack, consisting of its key products, such as ‘bibigo’, ‘Gourmet’ and ‘The Healthy Ham’, and consumers will deliver their messages of support to the athletes through online channels including social media. The ‘Cheer Up Food’ will be delivered to 60 or so members of the national team in the ‘Korea Ski Association’ and the ‘Korea Bobsleigh and Skeleton Federation.’
In addition to this campaign, the company is also planning an event for consumers, which will give away game tickets. Winners will be selected in a raffle from among consumers who purchased products such as ‘bibigo’, ‘Gourmet’, ‘Beksul’ and ‘Haechandle’, and they will receive the tickets for opening ceremony and various events including short track, ski jump and bobsleigh. The event will be held not only in hypermarkets, but also through various distribution channels such as convenience stores and online.

As the ‘2018 Pyeongchang Winter Olympics’ is not merely a national event, but a festival enjoyed by people all over the world, and CJ CheilJedang has been sponsoring snow sports and athletes since 2010, the company is also sponsoring this event. The company will make continued efforts to foster talented athletes by sponsoring unpopular events, and hopes that not only the athletes, sponsored by CJ CheilJedang, but also all Korean athletes will perform well at the Olympics.

Meanwhile, CJ CheilJedang began to sponsor winter sports in 2010 when it sponsored the snowboarder Kim Ho-Jun, and became the first company in Korea to sponsor both the Korea Ski Association and the athletes in the association. It is doing everything it can to help unpopular winter sports events develop and members of the Korean national team train in a better environment.

In particular, it is the third Olympics since CJ began to find and sponsor undiscovered rising stars in unpopular sports. As Korean athletes are expected to win their first medals in snow and sliding sports, such as snowboarding and skeleton at this Olympics, the company anticipates that its 10-year sponsorship of winter sports will bear fruit. CJ CheilJedang is currently sponsoring Lee Sang-Ho and Kim Ho-Jun in snowboarding, Yun Sung-Bin in skeleton, Choi Jae-Woo in mogul skiing.

Next
CJ CGV Opened its 100th movie theater in China