This year, CJ CGV has set a new record of 10 million viewers in the shortest time in Indonesia.

CGV Indonesia, a local subsidiary of CJ CGV, surpassed 10 million viewers in the country as of the September 13th. CJ CGV had entered the market as an outsourcing management company of Blitz Megaplex, a local movie theater chain in January 2013, and later switched its brand name to CGV in January 2017. In 2012, before CGV started its management of the chain, it recorded just 4 million viewers, and the number has since risen by almost two times as of 2015 with 7 million viewers.

In December 2016, the movie theater chain achieved another record by reaching 10 million viewers for the first time since its establishment. This year, CGV Indonesia marked 10 million viewers three months earlier than last year, maintaining its explosive growth trend. This rapid growth of CGV Indonesia is attributed to its aggressive expansion into regional cities, programming of local movies and various other content and digital marketing strategies reflecting the latest trends. Although Indonesia has a population five times larger than South Korea with 260 million, it has a box office that is five times smaller than that of Korea and possesses only around 1,300 screens. This means that this market has strong potential for growth. CGV Indonesia has implemented an aggressive platform expansion strategy that targets the surrounding areas of the country's capital city, Jakarta, as well as many regional cities.

In particular, it has primarily launched movie theaters in regions that currently don’t have any movie theater. As a result, the brand that had only 76 screens throughout nine theaters in 2012 when CGV entered the market is now, after five years since then, ranked second in the local cinema industry with 233 screens throughout 35 theaters. The number of viewers in theaters in regional cities has also consistently grown, and now these theaters record a seat occupancy rate of over 21 percent, which is similar to that of larger cities. 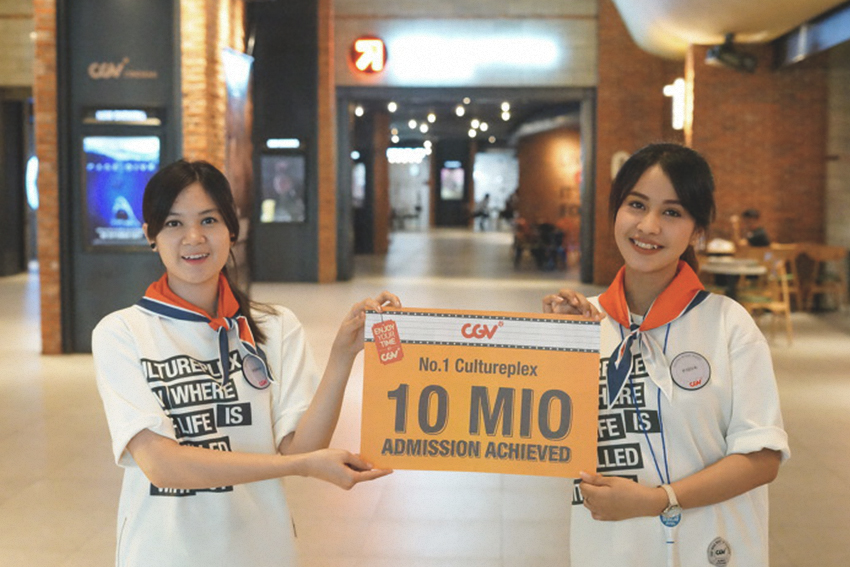 It is also worth mentioning that CGV Indonesia focuses on digital marketing given the nature of Indonesian customers, who tend to be sensitive to digital environments; there are over 60 million users of social media in Indonesia. Of note, digital marketing aspects in this market include a charging-based payment method and mobile membership service, which reflected the latest consumption patterns of teenagers and those in their 20s.

CGV Indonesia launched 'CGV Pay' service with a charging wallet service for customers in their teens and 20s, who are familiar with making mobile payments. With CGV Pay, you can book a movie ticket online, through mobile or from a ticket machine, and obtain various discounts from an online shop. Since CGV Pay was launched in January, over 500,000 customers have joined the service.

CGV Indonesia is also engaged in various CSR activities to contribute to the growth of the local film industry and foster and support local professionals. In July, it opened Rumah Film Indonesia in Yogyakarta in an effort to vitalize the local film community. In addition to operating the center, CGV Indonesia fosters future filmmakers and carries out projects for supporting the production and showing of movies. CGV Indonesia is taking the lead in vitalizing the local film market by, for example, opening the second "CGV Art House", a dedicated independent movie theater.

"CGV Indonesia is opening up new movie theaters in Jakarta and other regional cities and aims to open more than ten theaters by the end of this year and operate over 100 theaters by 2020," says Kim Gyeong-Tae, the president of CJ CGV Indonesia. "We will strive to lead cinema culture in Indonesia by building special theaters such as ScreenX and 4DX and online service platforms for enhanced customer convenience and contribute to the growth of the local film industry through various CSV activities."

Next
Beyond Joy into Newness