- Continues to challenge as a leading theater company in the world

▲ Cinemaximum Theater No. 91 in Yozgat, Turkey

On June 19, CJ CGV announced that the company opened Cinemaximum Theater No. 91 in Yozgat, Turkey just days earlier on June 15. CJ CGV has been operating theaters under the brand name "Cinemaximum" since they acquired MARS Entertainment Group in April 2016, the largest movie company in Turkey.

In particular, open to cj cgv both inside and outside the country and the 400 with theater and global business live up to its responsibilities as a theater in fifth place. In addition, flogged more global scale movie theater, putting. 401 in Chongqing, China, the last 16 stores opened the door, and China until the end of this month.
Hangzhou, Indonesia Pekanbaru, propaganda, Indonesia, Mataram, Hanoi, Ha Tinh, only eight abroad, including the Open will add theater. 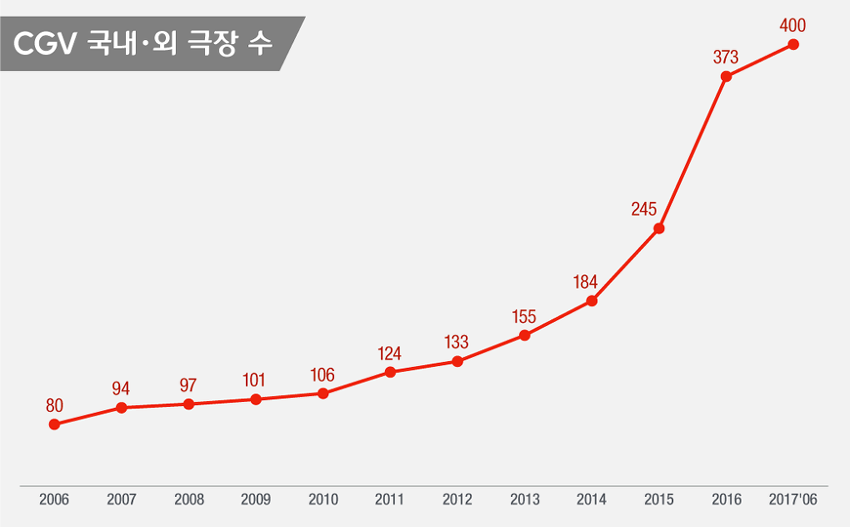 This was the 400th theater to open in 19 years since CJ CGV opened its first theater named CGV Gangbyeon in 1998. At present, the theater operator has a large proportion of its overseas theaters -- 1,031 screens in 139 theaters in Korea and 2,002 screens in 262 theaters abroad. Based on its competitiveness in the domestic market, CJ CGV began engaging the global market by tapping into Chinese demand in October 2006.

In 2010, CJ CGV branched out to the US, Vietnam in 2011, Indonesia in 2013, Myanmar in 2014, and Turkey in 2016. It took 9 years to eventually open the 100th global location since the first foray into China. In October 2015, they opened the 100th overseas theater in Qingdao, China. Of particular note, the number of theaters in the global market grew 2.5-fold in less than two years since reaching a milestone of opening the 100th theater. In addition, the number of overseas theaters began to eclipse that of domestic theaters for the first time since the acquisition of MARS in Turkey last year. CJ CGV expects that overseas sales will soon surpass domestic sales by the end of this year. 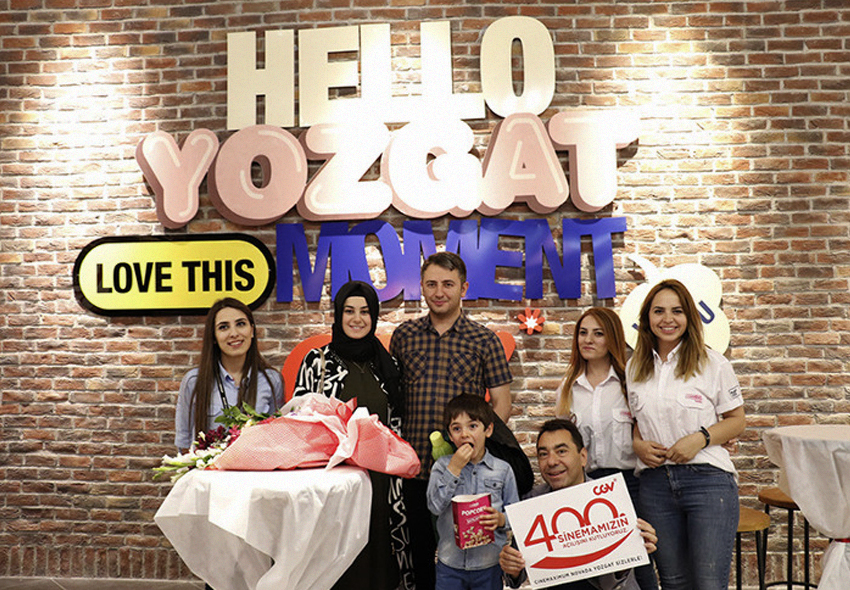 CJ CGV aims to ramp up the number of domestic and overseas theaters to 450 by the end of this year and to secure 10,000 screens worldwide, while posting 75% of its sales in overseas countries by 2020.

CJ CGV’s accumulated know-how in sophisticated theater operations and services in Korea and differentiation strategies according to countries laid the groundwork for opening the 400th CGV theater. Especially after entering China, the company differentiated its theaters from local ones by spreading the concept of 'Cultureplex', a multi-cultural space. In the United States, CJ CGV has become a boutique cinema with the aim of becoming a luxury theater with premium seating. 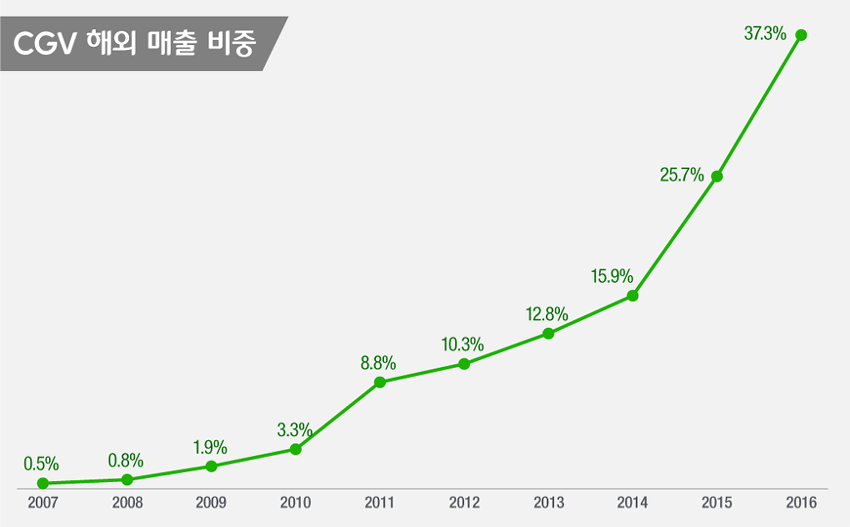 In Vietnam, CJ CGV launched a variety of campaigns targeting people in their 20s and 30s. In Indonesia, online marketing was carried out in consideration of audience demographics, many of whom are avid social media users. Myanmar and Turkey are at the heart of the Korean Cultural Wave, particularly with respect to K-Pop. CJ CGV is also looking forward to expanding the market of Korean films by focusing on the strong growth potential of the two nations.

- Contribution to Spread of Korean Cultural Content beyond a mere Platform 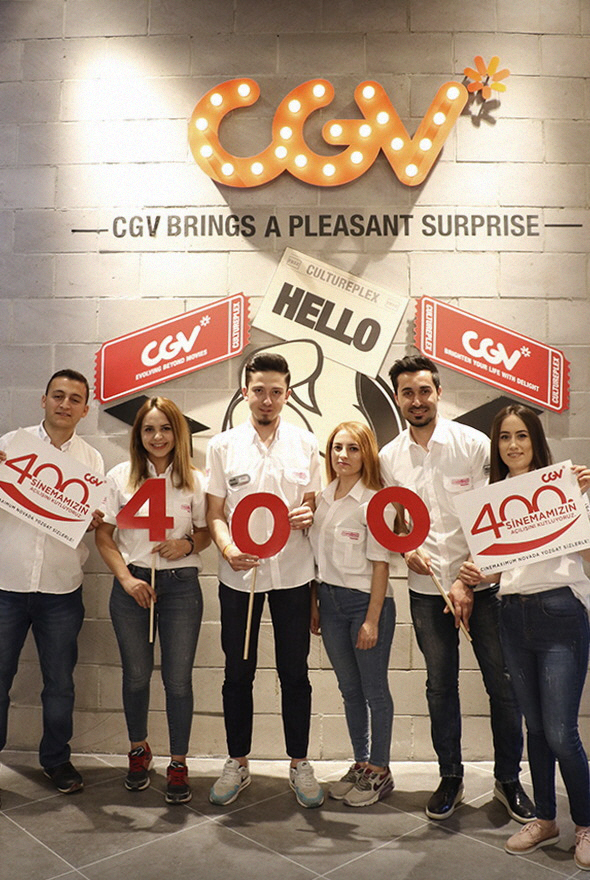 By increasing the number of its theaters overseas, CJ CGV is contributing to the globalization of Korean contents. In countries which CJ CGV has made a foray into, the company is steadily increasing the number of Korean movies opening up in local theaters and developing various movie distribution approaches to create synergies. For example, CJ E&M is the first in the Korean content industry to create a local subsidiary in Turkey and tap into the local film market through CJ CGV's distribution network in that country. CJ CGV began to produce a Korean-Turkish joint production which is a Turkish version of the film “A Wedding Invitation" in June and also is working on a script of a Turkish version of the Korean film “Miss Granny" with plans to start filming it within this year.

CJ CGV is making all-out efforts to promote local films of diversity and social contribution activities while making advances into overseas markets. Having opened art houses in Vietnam and Indonesia in 2015, the company is seeking a balanced development of the film market by opening an art house for indie films in Turkey in January 2017. Since 2011, CJ CGV has been also taking the lead in supporting film education for local youths such as those in China, Vietnam, and Indonesia through the 'Toto's Film Making Class', its iconic social contribution activity.

The increase in the number of overseas CGV theaters is quite notable as CJ CGV faithfully plays a role as a platform for spreading Korean culture that transcends quantitative growth. In particular, the company will contribute to the spread of K-Movies by introducing Korean films in the Turkish and Vietnamese markets where they rank first in movie distribution and screenings, and supporting Korean film companies’ advancements into the overseas countries.

Next
Study on ‘Atopy Improvement Efficacy of Kimchi