Who Will Stop Them? Hilarious Revue

Who Will Stop Them? Hilarious Revue by Storytellers during Joseon Dynasty which Tears Down Periodical Barriers 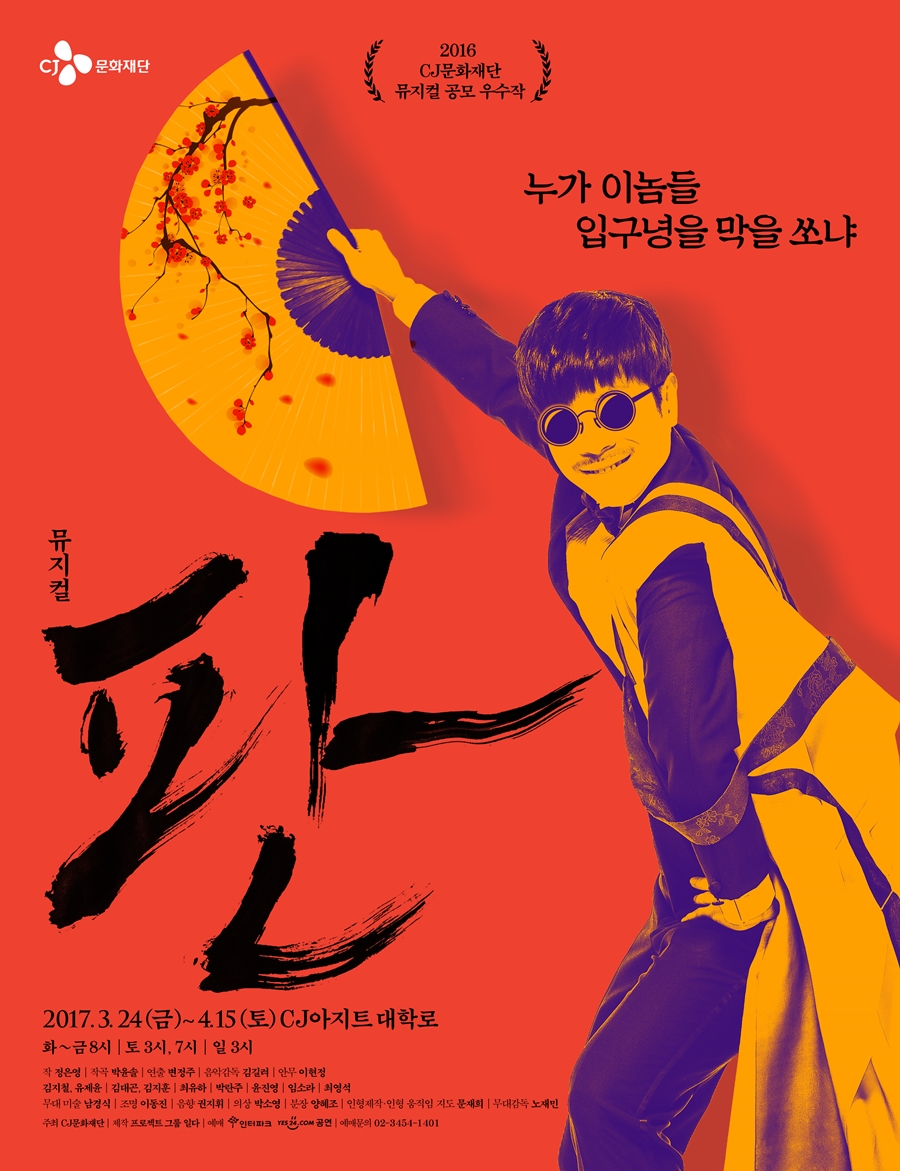 CJ Cultural Foundation has promoted Korean creative musicals since 2010 by discovering and cultivating talented performers and presenting their works in the form of reading performances over the past seven years. This time, the foundation will present regular musicals.

The musical “Pan”, which was created by new writer Jeong Eun-Young and composer Park Yoon-Sol, was selected as Creative Minds in November 2015. The musical was put on as a reading performance in June 2016 after a development process including professional mentoring. The musical received good responses from audiences thanks to its well-written story, satire and humor at the time. Accordingly, CJ Cultural Foundation selected the musical “Pan” as a work to support through its project to expand its support for performance creators which began this year.

The musical “Pan” describes a process where Dal-su, a son of a noble family, becomes the best storyteller for telling love stories and political satire during the Joseon Dynasty period in the late 19th century. Writer Jung Eun-Young depicts with witty dialogue in a well-knit structure a process where Dal-su is attracted to storytelling through Ho-tae and receives instruction about how to tell a story and Dal-su’s thrilling double life -- A gentle son of a noble family in the daytime and a storyteller with a free soul at night. The combination of the two characters which combines with humanity adds to its vivaciousness. Because main characters act as the storytellers, it is fun to enjoy stories within the stories. In addition to this, the classical and sophisticated music of composer Park Yoon-Sol added to the work’s appeal.

The work, which was 90 minutes long in 2016 when it was a reading performance, was reborn as a 110-minute regular musical after about 10 months of an additional development period. Byun Jung-Ju, a director who won a Best Director at the 5th Yegreen Musical awards in 2016 with the musical “Arangga”, and Kim Gil-Lyeo, a music director who is well-known for the musical 'Deep-Rooted Tree' and 'Empress Myeongseong', took part in the musical “Pan” which stars musical actors and actresses such as Kim Ji-Cheol, Yoo Je-Yoon, Kim Dae-Gon, Choi Yoo-Ha, Park Ran-Ju, Yoon Jin-Young, Im So-Ra and Choi Young-Seok.

"In April 2016, we opened CJ Azit Daehakno to step up our support with creative and performing spaces. Beginning this year, apart from reading performances, we will support production of one or more musicals annually," Lee Sang-Joon, a director at CJ Cultural Foundation said. "We will make more efforts to build a creative ecosystem that will enable talented new performance creators like Dal-su in ‘Pan’ to become confident about their growth potential and actively try hard to achieve their goals."

Meanwhile, CJ Cultural Foundation is running “Tune Up,” in the music sector, “Creative Minds” in the performance sector and “Project S” in the storyteller sector as projects to support the discovery and nurture of talented people in the field of popular culture and the development of contents. Since 2010, “Creative Minds” has discovered a total of 88 new creators in the musical and theater sectors and supported production of 52 musicals’ reading performances and plays. Its representative works include the musicals “Moby Dick,” “Goddess Is Watching,” “Pungwolju,” “Gyun,” “Arangga,” “Desirable Youth” and “The House Where Boy B Lives.”