Something came to life in me when "Tomorrow", a title of the original soundtrack to the television series "Misaeng", led by the protagonist Jang Geu-Rae, the hero of the show who endures a very busy daily life. Original soundtracks of films and dramas, which express the emotion or situation of characters, sometimes leave a lingering tone that is stronger than any line.

On September 24, young students who attended the music class of CJ Donors Camp's Dream Building Creativity School learned about original soundtracks (OST), which consist of an attractive music genre. CJ Creative Journal will introduce you to the amusing and meaningful class where these students learned theories and made OST to their life story with special mentors.

CJ Donors Camp's Dream Building Creativity School
It is a social contribution project aimed to educate underprivileged youths by using CJ Group's food and culture business infrastructure to help them become future leaders.
Various kinds of people including college students, CJ employees and experts provide education and have been joining the program as mentors to offer training since 2013.

"A good OST reminds people of the drama which it accompanies!" 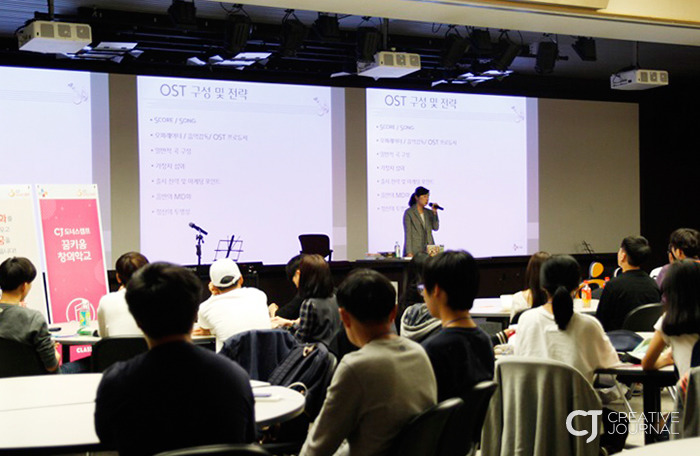 ▲ Ma Joo-Hee from CJ E&M is lecturing about OST as a mentor.

Almost all song lyrics have their own story. They tell us a story about life change after breaking up with a lover, why one felt grateful to their family or sometimes the process of making food. If the lyrics win the sympathy, the song will be loved even more.

To become a successful OST, however, another factor should be added on top of this: a successful OST should be able to remind listeners of the drama or film for which it was made. This is why creators such as authors, composers and OST producers try to deeply understand a scenario and express delicate emotions just like actors do.

Ma Joo-Hee, who is in charge of OST at the Music Division of CJ E&M, gave an intriguing lecture about not only the basic characteristics of OST but also how the composition and strategies for OST should be established by presenting various examples, including OST to hit television series "Reply".

As she was actively employed and succeeding in her field, her lecture was vivid and practical. From her presentation materials, I could see the efforts she made to cater the lecture to young students in an easier way.

Like many other youth educational programs and career experience programs, CJ Donors Camp's Dream Building Creativity School also combines a theory class and a practice class. This practice class, however, is not simply aimed to acquire techniques.

It is also an opportunity to learn about yourself, including what you really want, what talents you have and how you want to live your life, and also a personality class to learn what kind of mindset and attitude you should have to succeed in your target area. This is something that differentiates Dream Building Creativity School from other programs.

On that day, the students learned about the definition of OST as well as the characteristics and examples of good OST, and then partook in a practice class to make their own OST under the theme "My Dream". The name of the practice class was "The Piano Singing My Story". 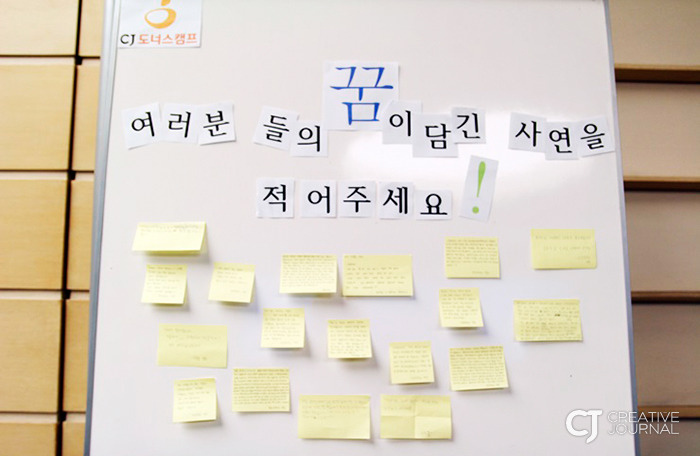 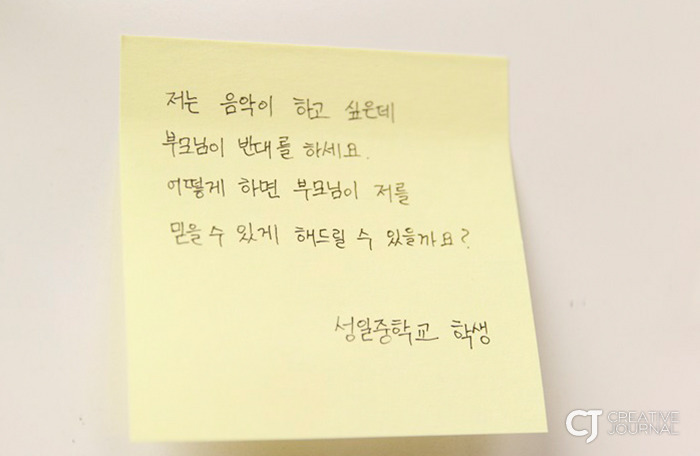 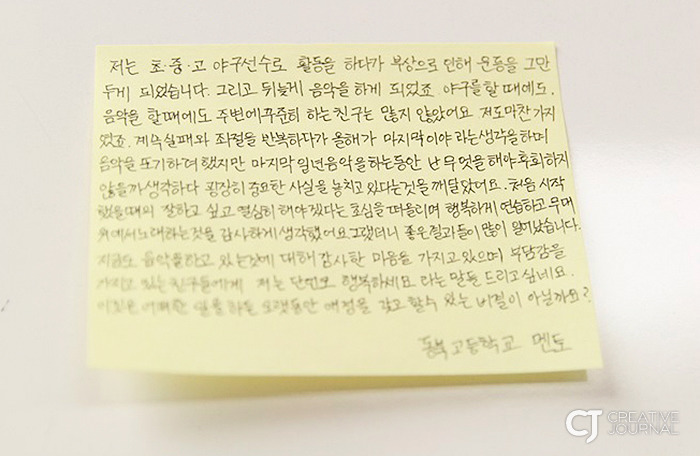 ▲ Various dreams and stories of young students, including their expectations, exciting moments and concerns

The students wrote a story about their dreams. Memo pads containing their new ideas or candid stories were attached on a message board. Only the sound of pens etching across memo pads filled the quiet lecture room that was full of students’ eyes shining brightly.

Finally, pianist Song Kwang-Sik, who is the chief mentor for the music of 2016 Dream Building Creativity School, and broadcaster Choi Hee, as a special mentor of the day, appeared on the stage.

Currently, the duo hosts a corner, [As Life Goes On], in the radio show "Kangta's Starry Night" on MBC FM radio, where they instantly create and play a song based on the story of a radio listener. This is why they joined this special music class at Dream Building Creativity School. 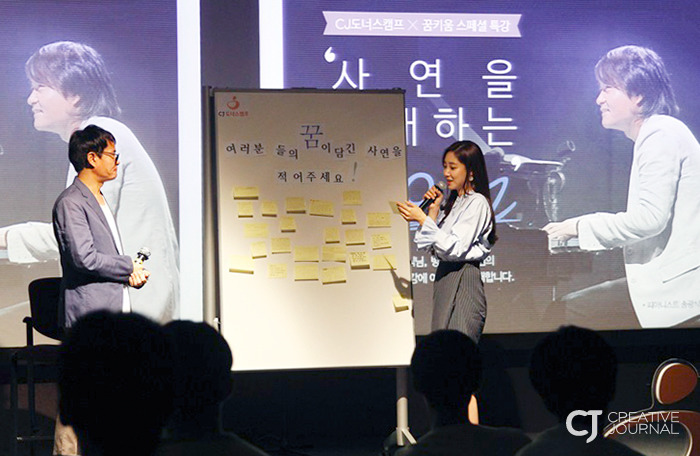 ▲ What will be the next story? 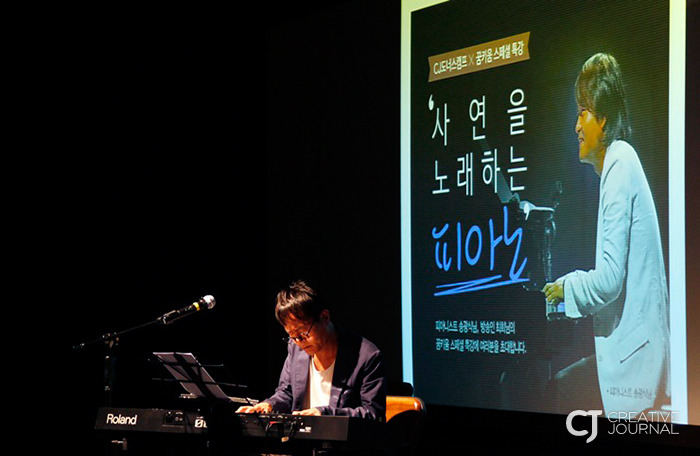 ▲ Song Kwang-Sik is instantly playing a song composed based on the story of a student.

The students were excited and amused by the hosting of Choi Hee, and when Song Kwang-Sik played a song that he improvised based on a story, they suddenly looked completely swept away by the music! How much should we practice to be able to create and play such a nice song so convincingly? The song he played was not simply a beautiful song but it was perfectly suited with the given story.

The young students were deeply moved by the song not just because the song was great but also because they were dreaming of a musician.

"Do not rush, just keep going!" say the two mentors 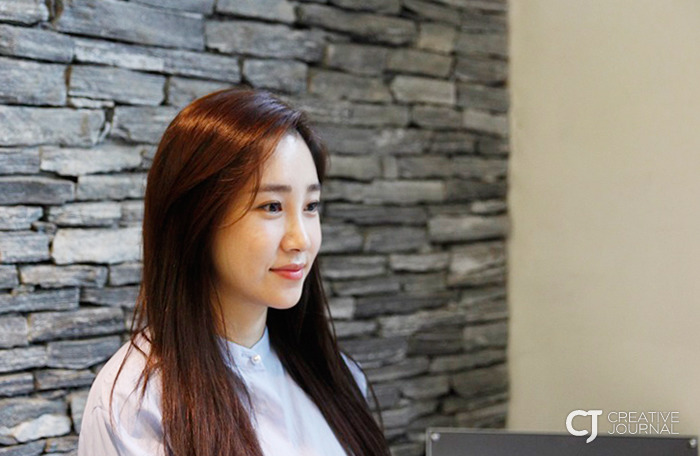 ▲ Special mentor Choi Hee left a message for young students after the class.

While introducing stories of the students, Song and Choi also gave advice based on their own experiences. Choi Hee talked about the first broadcast where she made a debut as a sports announcer. In her comments, she advised, "Every first time may seem difficult but once you clear the challenge of doing it just once, you will get confidence and be able to do better."

"People will soon begin to be able to live until the age of 120 and you need to be far-sighted rather than short-sighted. If you patiently make efforts every day, someday your dream will come true," she added, encouraging young students. 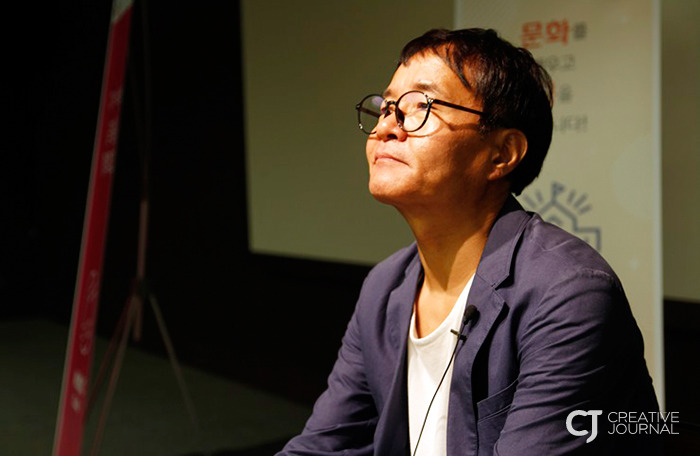 One student had a dream of becoming a professional drummer but what made him hesitate was the rumor that most drummers, except some truly talented ones, tend to not live up to expectations. Song felt sorry for the young student in that he has already started to give up his dream due to money issues.

And he advised the student to play the drums as if they were a toy or a friend in order to become more familiar with them, without putting too much focus on things like dreams and career. He said that if he learned to deeply love playing the drums, the money part will take care of itself. 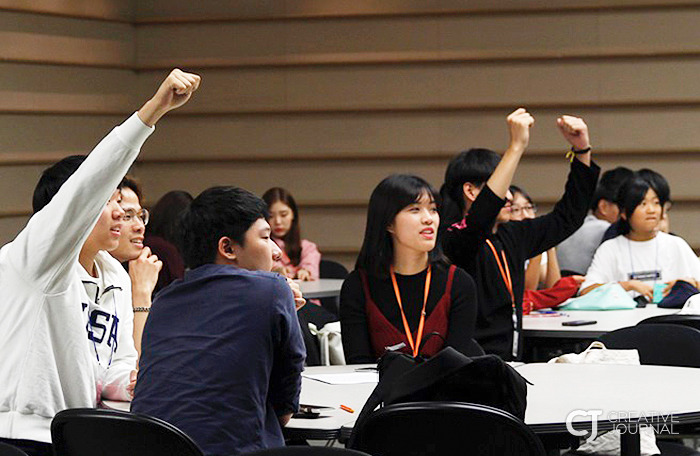 ▲ The students enjoying the class

Today, the students of Dream Building Creativity School took a step closer to their dreams and made notable progress. As always, CJ employees, college students and experts acted as mentors and did their part. Let's look forward to the birth of great musicians who will make wonderful OST that will truly move the audience like the OST to television series Misaeng or Signal. Let’s cheer them on and help them keep their chins up!