[tvN10 Festival & Awards] As expected, it had a youthful air to it! A unique festival hosted by 10-year-old tvN which recently went through a growth spurt.

'tvN10 Festival & Awards', a unique festival enjoyed by 10,000 people!
The first awards ceremony of 10-year-old tvN, which recently went through a growth spurt, was as youthful and vibrant as expected!
The highest rating of the live-broadcast awards ceremony exceeded 6%. 'Enthusiastic responses'

From the ‘Festival’ filled with killer contents to the ‘Awards,’ a festival of stars where the iconic entertainers and actors/actresses of tvN gather together, "it couldn’t get any better."

The 'tvN10 Festival' and the 'tvN10 Awards,' hosted by tvN, a total entertainment channel celebrating its 10th anniversary, ended in great success.

The 'tvN10 Festival & Awards,' held on October 8 (Saturday) and October 9 (Sunday) at Ilsan KINTEX, was attended by more than 10,000 people. They enjoyed an extraordinary festival that was loaded with killer contents.

The dramas and entertainment programs, greatly loved by viewers over the past 10 years, were all packed into the ‘Festival’ so that people could directly experience iconic contents, and the ‘Awards’ were studded with the stars who brought true honor and prestige to tvN. The audience responded enthusiastically to the event and had a great deal of fun.

The average rating of the 'tvN10 Awards,' which was broadcast live on the evening of October 9, was 4.5%, and the highest rating was 6.1% (pay-per-view households, Nielsen Korea). It was the best rating in the same time slot. The online videos for the ‘tvN Festival & Awards,’ which was held for two days, reached 2.8 million (11:00 am on October 10, Naver TVCAST), proving that people had strong interest in the event.

◆ Killer contents being displayed everywhere! People stopped at every booth at the 'tvN10 Festival.'

An extraordinary experience of the interrogation room of [Signal] - the recording studio of [Another Oh Hae-Young]! The enthusiastic visitors had to stand in line.

At the 'tvN10 Festival,' which was held for 2 days on October 8 and 9, booths for tvN’s iconic killer contents, such as [Misaeng (Incomplete Life)], [Signal], [Another Oh Hae-Young], [Reply 1988], [Entourage], [Rude Miss Young-Ae], [Honsul Men And Women], [Sexy Brain: Problematic Men], [Three Meals a Day], [Wednesday Food Talk] and [Mr. Baek The Homemade Food Master], were all set up.

The space was designed so that people could directly experience contents as if the scenes they saw on TV literally propped out into the real world. Visuals were in abundance, such as the photo spot based on the employee ID card of Jang Geu-Rae in [Misaeng (Incomplete Life)], the props that reproduced the alley of Ssangmun-dong in [Reply 1988], and the [Sexy Brain: Problematic Men] booth which provided gifts to people who solved brainy problems. Everything was well received by the audience.

In particular, people had to stand in line for a long time at the booth for [Rude Miss Young-Ae], which featured a tarot card reading event for finding a solution to one’s problems in life, the booth for the interrogation room of [Signal] where there were some tense moments to find clues to unsolved cases, and the booth for [Another Oh Hae-Young] where people can experience the sound recording like Park Do-Kyung, the callous man.

At the fan signing event for Kim Seol, who played cutie Jin-joo in [Reply 1988], fans scrambled to take a picture with her and cheered. It helped underscore the popularity of the ‘Reply’ series, which caused a national sensation.

The live session on the set stage in the exhibition hall presented the audience at the festival with yet another joy.

The representative production crew and entertainers of tvN programs, e.g. PD Shin Won-Ho, and Ryu Jun-Ryeol, Lee Dong-Hwi and Ahn Jae-Hong of [Reply 1988], director Kim Won-Seok, and Lee Seong-Min, Yim Si-Wan and Kim Dae-Myeong of [Misaeng (Incomplete Life)], Kim Hyeon-Sook of [Rude Miss Young-Ae], and PD Nah Yeong-Seok and Ahn Jae-Hyeon of [New Journey to the West], came on stage for a talk show, and gave some time for communicating directly with the audience.

The actors/actresses revealed behind-the-scenes stories, plus listened to what the audience had to say about their problems in life. Their simple and sincere attitude brought them closer to the audience, and received an enthusiastic response. 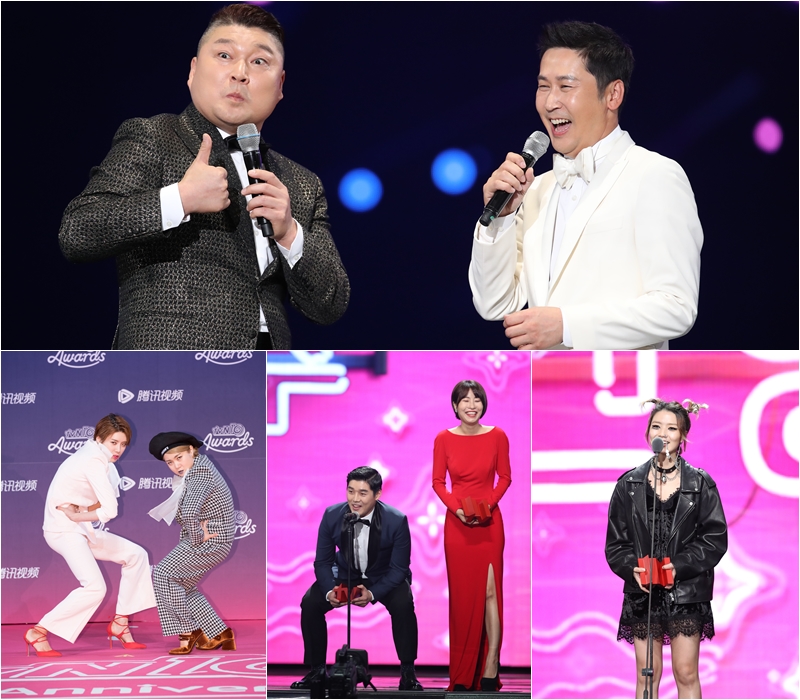 ◆ As expected, there was a youthful spirit in the air! The first awards ceremony in 10 years, it offered pleasant surprises that only tvN can create!

There has never been any awards ceremony like this before! Truly unique and unprecedented!

The 'tvN10 Awards,' held on the evening of October 10, lasted for more than 5 hours from when it started out on the red carpet, but no one could look away even for a moment throughout its entirety.

The presence of the stars representing the past 10 years triggered people to reminisce over their memories of time past, and the unprecedented awards ceremony, which has never been seen anywhere like this before, completely captivated viewers’ attention.

Following the red carpet, emceed by Jang Do-Yeon and Park Na-Rae, a perfect pair who served up some fantastic entertainment, the main ceremony, led by representative MCs of Korea, Shin Dong-Yup and Kang Ho-Dong, featured corners that have never been seen in any other awards ceremony, which made the audience frequently burst into laughter.

They made a video call to Park Bo-Gum, who could not come due to his drama shooting schedule, in real time, and played a prank, e.g. lowering the microphone during an acceptance speech.

The camera spotted a couple closely following the ‘Kiss Time,’ one of the attractions at the baseball park, and the cast of [Comedy Big League] unabashedly parodied the characters played by the actors and actresses at the awards ceremony. Creating unexpected situations, the ceremony totally blew away the usual boredom of an awards ceremony.

The awards ceremony was also remarkable. As all the programs and cast of the past 10 years are candidates, the news of the awards ceremony instantly aroused the curiosity of viewers. Original awards that can 'be found only on tvN ' were included.

In particular, the ‘Perfect Attendance Award,’ given to Kim Hyun-Sook of [Rude Miss Young-Ae] who has never missed an episode for 10 years since the launch of tvN, and the 'Roco King & Roco Queen,' Award given to Mun Jung-Hyuk and Seo Hyun-Jin, the inseparable couple of [Another Oh Hae-Young], the flagship romantic comedy of tvN, fully reflected the history and vibrancy of tvN. 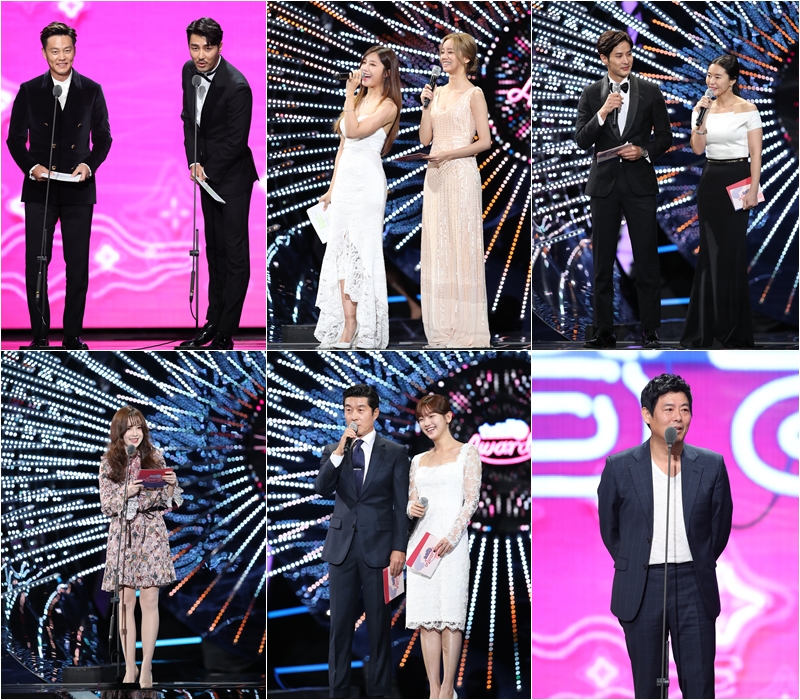 Surprise presenters? It turned out that there was a more significant meaning behind them!

It was truly interesting to watch the presenters who seemed to show up unexpectedly, but proved to have a more meaningful purpose.

Ku Hye-Sun sneaked onto the stage as a presenter for her husband Ahn Jae-Hyeon, and announced that [New Journey to the West] was the winner of the entertainment contents award, proving they are 'romantic lovebirds.'

Cha Seung-Won and Lee Seo-Jin, standing on the same stage, were also a surprise. The two actors were much adored for their appearance in [Three Meals a Day], but they never appeared in the same episode. They came on the stage as presenters of the 'Made in tvN' Award, and carefully rubbed shoulders as if they were respecting each other in their respective territories, i.e. a fishing village and a farming village, and conducted psychological warfare in terms of ratings and cooking abilities, thereby bringing smiles to the audience.

‘Porter’ Lee Seo-Jin, who received the ‘tvN Entertainment Grand Prize’ from the foursome of [Grandpas Over Flowers], Lee Soon-Jae, Shin Goo, Park Geun-Hyeong and Baek Il-Seop, remarked, "I’d like to hit the road again with them," creating a heartwarming atmosphere.

Jung Eun-Ji of [Reply 1997], and Lee Hye-Ri of [Reply 1988] were co-presenters that were designated to give the ‘Special Acting Award’ to their ‘father’ Sung Dong-Il. It was truly like story-telling. Because of this, the performances all became even more special!

The congratulatory performances and the special performances, which added to the energy of the tvN10 Awards, flowed like a well-woven story.

When the contents award for Best Drama was given to the [Reply] series, a special stage was arranged for each series. After the introduction of [Reply 1997], Seo In-Guk and Jung Eun-Ji sang a duet, and after some reminiscing about [Reply 1994], Kim Sung-Kyun and Do-Hee performed together.

At the end of the video introducing [Reply 1988], the voice of Lee Moon-Se, who deejayed on the radio in the drama, was played, and the immediately following stage was the congratulatory performance of Lee Moon-Se. All the audience applauded the sweet song, sung by Lee Moon-Se who brought back the emotions of the drama and the warm memories of the 1980’s and 1990’s.

Psy, who came on the stage at the beginning of the awards ceremony, passionately sang his hit song 'Entertainer,' sending everyone into a frenzy. It was a perfect match for the ‘tvN Awards’ ceremony that covered all genres from entertainment and dramas to comedies.

Kim Seok-Hyeon, head of production at tvN, said, "As it was our 10th anniversary, we wanted to make a festival together with our viewers. So we reflected the results of the netizen online voting to the selection of awardees, and chose a viewer as the presenter of the 'Contents Grand Prize' to show our appreciation for viewers. There have been many programs that greatly helped tvN grow, but it’s unfortunate that we were not able to fit everything in the limited amount of time that we had."

◆ tvN, which exhibited the power of a ’10-year growth spurt,’ continues to lead trends!

tvN made a strong impact on the broadcasting industry with the 'tvN10 Festival & Awards,' which is the culmination of our competencies, and proved our potential to transform it into becoming the iconic total entertainment company in Korea within just 10 years.

Through ongoing investments and development of contents, tvN has led trend movement in the contents market, and became a 'trustworthy channel.' tvN is planning to grow into a ‘global trend-setter in contents’ that will provide viewers with novel enjoyment, and provide entertainers with a stage on which they display their potential to the fullest.