O’live TV's Taste of Korea holds its 4th feast! What are four keywords to enjoy for the first episode?

Creating the history of Korean food, the new season premiere of O’live TV's Taste of Korea will finally be aired tonight!

"Taste of Korea" creating the history of Korean food 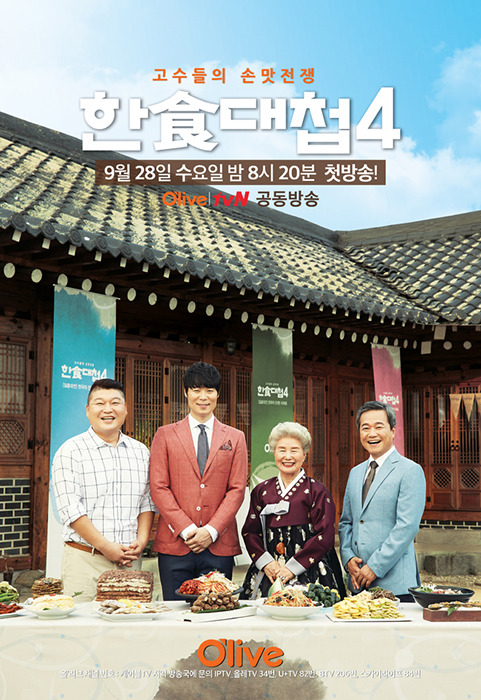 The first episode of Season 4 of O’live TV's Taste of Korea will reveal itself on Wednesday, Sept. 28th, at 8:20 pm.

Having highlighted the value of Korean food by exploring Korea's unique food ingredients and rich Korean dishes, the show has gained more popularity with every passing season.

▲ Kang Ho-Dong, the former Korean wrestling champion who showed a humble attitude in the show!

The new host of Taste of Korea’s Season 4 is Kang Ho-Dong, one of the most widely known hosts in Korea.

"As this show has received lots of attention since even before this premiere, I am honored and at the same time feel obliged," Kang said. "I will host this show, trying to allow viewers to feel as if they literally tasted dishes they are seeing. I would like to contribute to the success of Taste of Korea."

In the show, he will instill a comfortable and pleasant mood based on his distinct sociability and deliver the stories of regional master cooks.

The best skills involving his passion and intriguing storytelling ability of Kang Ho-Dong, who has hosted a variety of entertainment shows, are expected to make this show even more tasty.

This season has seen some changes in the judges as well. In addition to Young Soon Shim and Choi Hyun-Seok, food columnist Yoo Ji-Sang joined the show as a new judge.

Having a wide knowledge of Korean food, Yoo is a food reporter and columnist and also an author of various books on Korean food, and he is expected to deliver many interesting stories based on his knowhow that has been amassed over the years.

Yoo said, "I will try to be a judge who discovers many stories about Korean food and share them with our viewers." He also compared his role in the show to a married woman's father.

Yoo Ji-Sang says that regional master cooks often told him he felt like a married woman's father. It is said that he captured the hearts of the masters with his distinct and gentle charisma.

Yoo also said, "I feel sorry that we are losing the diversity of ingredients. I expect Taste of Korea to bring it back to our table." Surely, he will be a good judge who will brighten the value of Korean food.

#Dishes for a feast

▲ The beginning of a legendary season - Taste of Korea’s Season 4!

The first mission of the one-dish meal competition is to make a feast dish!

Judge Young Soon Shim revealed the mission in her saying, "From ancient times, a feast was a place where many people gathered and enjoyed faithfully cooked tasty dishes. I think today should be celebrated as we first met each other. I expect you to make the best feast dish for today." For a sumptuous feast, a variety of rare ingredients appeared, amusing the eyes of viewers.

So many rare delicacies, including bull testicles for stamina; a giant octopus measuring 13 kg in weight and 150 cm in length; Sugure, tough beef directly under the skin; and a huge croaker, will attract the attention of viewers.

The masters compete to get the drop on their opponent from the first competition with their "out-of-this-world" ingredients!

The first episode will also introduce local dishes prepared by the masters from the ten regions before the one-dish meal competition.

The masters who threw their hat into the ring for Taste of Korea’s Season 4 will serve the best table with their best dishes. The first episode will be a great chance to measure the ability and taste of the ten regional masters. The show presents ruthless competition among the best-ever masters representing their region. One interesting element is the heated rivalry between the Seoul team and the North Korea team.

The Seoul team consisting of a master who is a former cook of the Blue House and a certified Master Craftsman Cook versus the North Korea team of a nation-leading cook and a North Korean traditional food master. How thrilling this rivalry is!

The members of the Gyeongbuk team, who enjoy a 25-year-long friendship, showed pride in ancient recipes and local dishes, while the Chungbuk team of two wives married to the eldest sons from their originating family, a unique relationship in Korea that tends to produce the most diligent and hardworking chefs at home, who say they perform 20 ancestral rites a year in total.

Of the ten teams in this season, four teams are a family team, and they are expected to exhibit good teamwork and the great taste that only a family can expect to have.

Expected to be the best season ever, the first episode of Season 4 of O’live TV's Taste of Korea will be aired on Sept. 28th (Wed) at 8:20 pm.

Next
The sweet magic that brings you a better life!

Previous
Chunghwa TV is transforming into a media outlet