Come out and play! An MCN festival with the best creators! 2016 DIA Festival

Come out and play!

An exciting shout signaled the beginning of a happy festival with domestic and international top-class digital creators and their fans! The festival is the first DIA Festival, Korea's first and largest MCN (multi-channel network) festival held at COEX on August 27 and 28.

Let's take a look at the DIA Festival where over 30,000 people enjoyed exciting communion and communication together.

Creators are those who we can encounter at any time through various personal broadcast channels such as YouTube or Africa TV. Creators are our best friends that can always be trusted to be by our sides; whenever you play a game, put on makeup, choose a toy, deal with a loss of appetite or simply feel lonely or bored, you can find those of which who will deliver funny stories, tips and knowhow, clear commentaries and interesting reviews.

And the first-ever DIA Festival in 2016 is the place where you can meet these star creators in person and enjoy making broadcast contents along with them! ▲ Are you ready to play? Let's shout "DIA Festival"!

There are 8.525 million subscribers of DIA TV partners and the seven international teams, and this underscores the power of C-generation, or the "Contents Generation".

Having sub-stages, such as gaming, beauty, entertainment, music, food and kids stages, in addition to the main stage where exciting events will be presented, the festival allows visitors to enjoy a wide range of programs by moving from one place to another.

The DIA Festival was an exciting place where I was able to have a great time with my favorite creators. Seeing really is believing! Feel the shouting of "Come out and play!" from the 2016 DIA Festival in the photos.

The pleasure of waiting followed by the joy of being together! ▲ The audience seemed to feel excited while waiting for the DIA Festival!

The morning of the first day of DIA Festival! COEX was already crowded with many fans at 7:00 am. As the festival competed for the top in the online ticket reservation ranking, the visitors looked truly excited. They began to enter the festival venue, while keeping an orderly fashion.

While star creators hosted their show on the main stage, other professional creators also performed their show on sub-stages for various fields, including gaming, beauty, entertainment, music, food and kids.

The joyous occasion continued non-stop from 11:00 am to 7:00 pm! Visitors checked the timetable and found the stages of their favorite creators and enjoyed their braodcast show together. Time really flies in the festival while you are enjoying a variety of shows performed on a total of seven stages.

Everything about DIA Festival, from beauty to food!

▲ Preview of DIA Festival by the Yoomdaeng-Daedoseogwan couple

Finally, the opening show started on the main stage. With a deafeningly loud shout, Daedoseogwan and Yoomdaeng, a star creator couple, appeared on the stage.

The power of Daedoseogwan who has 260,000 subscribers and the beauty and volubility of Yoomdaeng made the audience crazy! ▲ The Overwatch time by the Daedoseogwan-Yoomdaeng couple ▲ The Daedoseogwan-Yoomdaeng couple is taking pictures with their fans.

After the couple who took pictures and had some discussion with their fans, they displayed a bit of a lovers' spat while playing Overwatch, a first-person shooter game, together.

Daedoseogwan's fully entertaining commentary of the game combined with the power of Yoomdaeng made the audience unable to take their eyes off of the show. 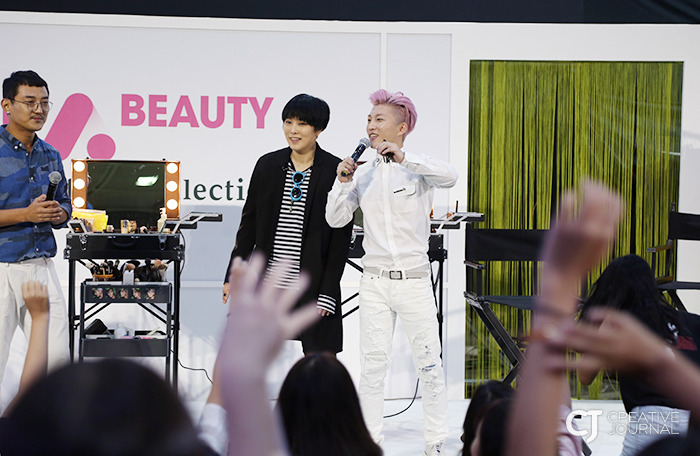 On another stage, SSIN, who is one of the leading beauty creators, appeared. Widely known through various programs, ads and articles, SSIN, along with Ricky KAZAF, a famous beauty YouTuber from Hong Kong, presented a collaboration on the stage.

Ricky is a popular makeup creator who has many fans in Asia including Korea. He is also known as a close friend of SSIN. ▲ Through "beauty", we are the world!

How genuine they came off when they responded to the shouts of fans and listen to them! Through "beauty", SSIN and Ricky have brought radiance to the faces of people of the world including Asia and I hope that they continue to showcase many compelling contents. ▲ Let's go! The beauty lesson by Lena and Caramel

Now it's time for a one-point lesson by beauty creators! Two makeup creators who receive unquestioning support from teens, Lena and Caramel appeared on the stage.

Lena has impressed many fans with her cuteness and gift for gab in her broadcasts, and when I saw her in person, she was really cute and was a smooth talker and I could understand why she is so popular. I instinctively remarked, "She is the prettiest girl in the world". ▲ Let's change yourself into a woman of autumn with Lamuqe.

Lamuqe is another star beauty creator. It felt truly amazing when I watched autumn-tinted makeup being completed by her hands. ▲ Despite the long wait in line, it will all be worth it once you reach the autograph session of creators.

The creators who finished their open broadcast also had some time to get closer to their fans through an autograph session. SSIN in red in the right of the picture took funny pictures with fans and gave her autograph to them, and Park PD also gave autographs to his fans with a big smile. ▲ A meeting of BANZZ and comedian Hong Yoon-Hwa - A savory talk between the two! Able to easily pick up on certain vibes? You should feel the force of two gourmands: "Prince of Meokbang" BANZZ and comedian Hong Yoon-Hwa! When I saw BANZZ in person, I cried "where did all the food go that he ate?" He looked much thinner than he did on his broadcasts.

He was a gracious host and speaker, and answered kindly to questions from fans and many people paid attention to his open broadcast on the stage. 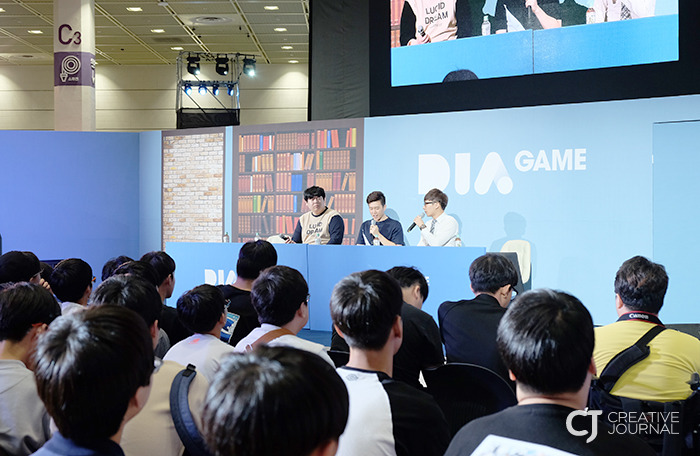 ▲ The game discussion that attracted lots of male fans

Another popular personal broadcast genre with many fans is game commentary. Tester Hoon, Kimu, Do Hyun Sung, and Dr. FunFun co-hosted a Blizzard game commentary show. The stage was full of male fans who were all ears to their broadcast. 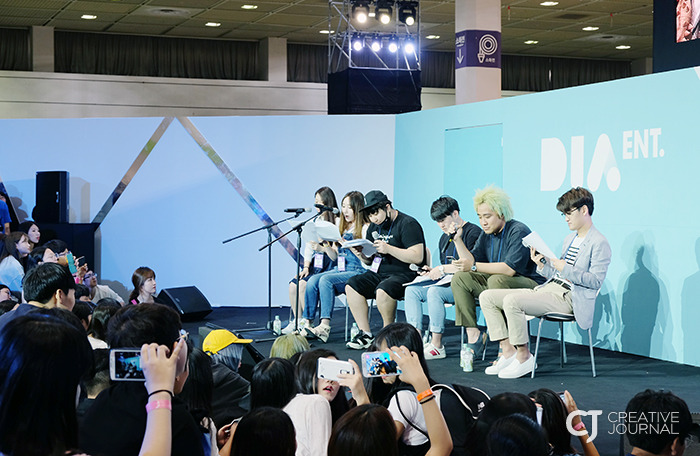 Familiar faces in the entertainment section! Yoo Jun-ho, well known for his sweet voice, and many other creators of great voices were hosting an extremely funny show in this section. Under the title of "50 Sweet Voices", they boasted of their eloquence delivered through ever-changing sweet voices and the audience lost themselves in wonder. ▲ The real dubbing time by dubbing artists from "Shinbi Apartment"

It is no exaggeration to say that every kid in Korea knows about "Shinbi Apartment"! Dubbing artists from the cartoon hosted a real dubbing show in the kids section. They received as much positive reaction from the audience as any other creator. 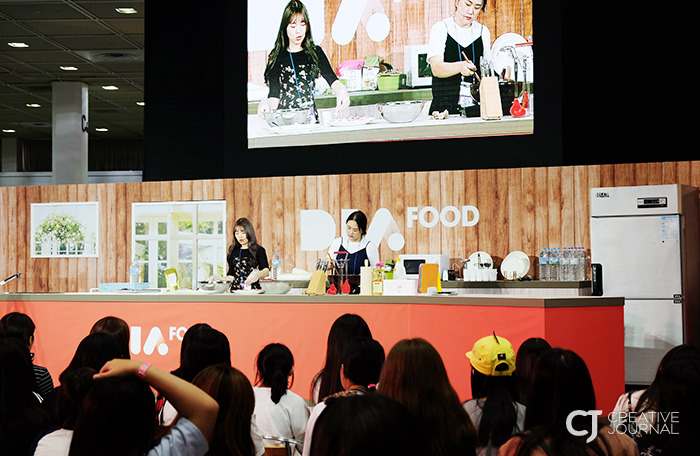 ▲ Watch the food creation in person and cook more easily!

The food section presented an amusing cooking show. It was so interesting that I stood watching the show for a long time. EJ Recipe and Sini disclosed their secret recipes for "sweet and sour pork" and "fried chicken" while sharing some conversation that was as delectable as their recipes.

Heopop, who is referred to as an idol of elementary school kids in the creator world, also hosted a show. In his show, he made attempts to fly with big balloons. The show proved why Heopop is so famous. Who else can take on such a challenge except for Heopop? ▲ Welcome to Heopop Time! I can do it! I’ll try everything!

I can do it! While watching the "power up" stage of Heopop, the creator who experiments everything, I thought that it is very precious to experience the fun of dreaming and imagining with creators and realizing and enjoying what I only dreamed and imaged about. I think that this represents the true spirit of digital contents created by creators and fans. ▲ The DIA Festival that made us happier with heart-warming sharing

DIA Festival was also the place where creators could put sharing into practice. Some creators including BANZZ, Dalchi, and Ulsan Big Whale, donated their cherished goods at an offline donation campaign of the CJ Donors Camp, an online sharing platform and encouraged people to participate in donations. Ten creator teams and three PD teams were honored to win the prize. The award was more meaningful as it was awarded through the festival held for creators and their fans.

Our festival is still on air!

▲ The video of 2016 DIA Festival finale performance by FatDoo

Even after the 2-day DIA Festival came to an end with a beautiful finale, our festival is still under way! As long as creators continue to broadcast and fans continue to enjoy them, the digital contents festival will live on through our smartphones and computers. ▲ "See you at next year's DIA Festival!

Did you enjoy 2016 DIA Festival that shouted "Come Out and Play!" and referenced the endless possibilities of digital contents? I will look forward to seeing you as a new creator who has a great time with fans at next year's DIA Festival!