In July, Jisan happened to be the hottest place around. You already had a chance to taste the Tune Up Stage in the previous posting. This time, we will explore the surroundings of the stage and the backstage of musicians. A summer festival held in amid pristine nature! Now let's take a look at the site more closely! This year's Valley Rock Festival was held in Jisan Resort. As the festival came back to Jisan four years after it last hosted the festival, many people had great expectations for this time. The Valley Rock Festival has a total of three stages: Big Top Stage, Green/Red Stage and Tune Up Stage. Around the stages are stalls for beverages, beers and snacks, where people could relieve their thirst or take a rest after performances. Booths also presented various events that added to the overall experience. The music never let up at Jisan Resort, the venue of the rock festival. After sunset, people enjoyed DJing, swaying their body to the rhythm. The Tune Up Stage looked even more emotional with LED lightings in the evening.

The audience going crazy for Tune Up Stage and many other artists, including Red Hot Chili Peppers, EDM artist Zedd and KimChangWan Band! I felt youthful energy from the audience, who were able to get away from their everyday lives to enjoy the performances.

Big Top Stage 1. Asian Chairshot from the 9th Tune Up 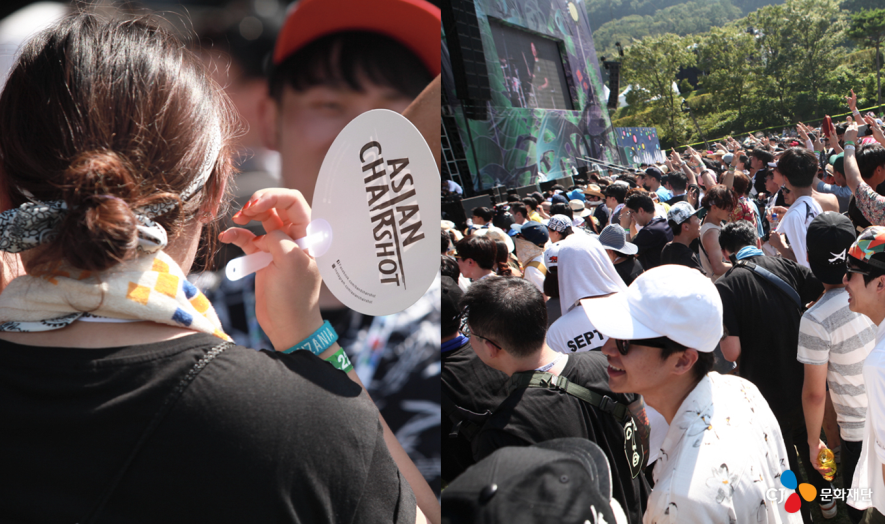 Hot weather was dominating on the first day and the audience all arrived while clinging to their fans printed with an Asian Chairshot logo. Soon after, the charismatic rock band Asian Chairshot appeared onstage and proceeded to fill the Big Top Stage with its unique Korean-style rock.

The intense vocals of Hwang Yeong-Won filled the place and guitarist Sohn Hee-Nam appeared with a black/white mask on. The guitarist played amazing music in the center of the stage, receiving enthusiastic applause from the audience. It is interesting that even the members of the team did not know about the mask Sohn wore before they came on the stage. Backstage, I met up with Asian Chairshot, who just finished their performance.

"He had suggested wearing a mask together before. Right before we came out onto the stage, we found out that he chose to wear a mask alone." - Hwang Yeong-Won, vocals of Asian Chairshot

"It kept it a surprise as I didn't want other teams to do something similar." - Sohn Hee-Nam, guitarist of Asian Chairshot

With their clothes wet with sweat, they were satisfied with their performance as they received a lot of fanfare from the audience. We had a good time while there, making a joke about the guitarist's mask. I met with Bye Bye Badman from the 5th Tune Up at the Big Top Stage in the afternoon of the second day. Their lively fashion style and the melody of 'Genuine', a new song released this June, created a fresh mood on the Big Top Stage. Following the song, they presented their unique rock sounds in songs such as "Young Wave" and "Birthday".

Bye Bye Badman had also appeared at the 'Valley Rock Preview Night' held on June's live club day as a preview concept for the Valley Rock Festival. At that time, the team had said in an interview, "You can look forward to our performance at the Jisan Valley Rock Festival as we spending a lot of time getting ready for that." Just as they had promised, they successfully pulled off their performance. As soon as they came down from the stage, I asked them about how they felt. They said their show picked up a lot of synergy from the enthusiastic reaction from the audience despite performing in the hot afternoon, and expressed their thanks to the audience. "It was so exciting that I was able to come up on the stage again despite this kind of weather." - ABTB

Backstage after their performance, ABTB said they felt honored that they were able to perform on the Big Top Stage of the rock festival, which is the stage of aspiration for many rock bands. They also mixed their first album while preparing for the festival, which I can't wait to listen to. "We usually feel good about our performances and today we were able to enjoy it even more thanks to the audience who seemed to have lots of fun despite the hot weather." - BeautyHandsome To BeautyHandsome, it was the first rock festival appearance in their band history. They usually play emotional music but this time, they prepared a lot to present a more 'rocking' performance at the rock festival. They brought a variety of songs ranging from a sweet song to a song with intense melody. They are also gearing up for their exclusive concert due in October. I hope we can see them again in next year's rock festival.

How was the backstage of Tune Up Stage?

Let's take a look at the backstage of the Tune Up Stage now. How did they look when Tune Up musicians performed on the stage for < R.I.P. Brothers. Sing for My Idol > 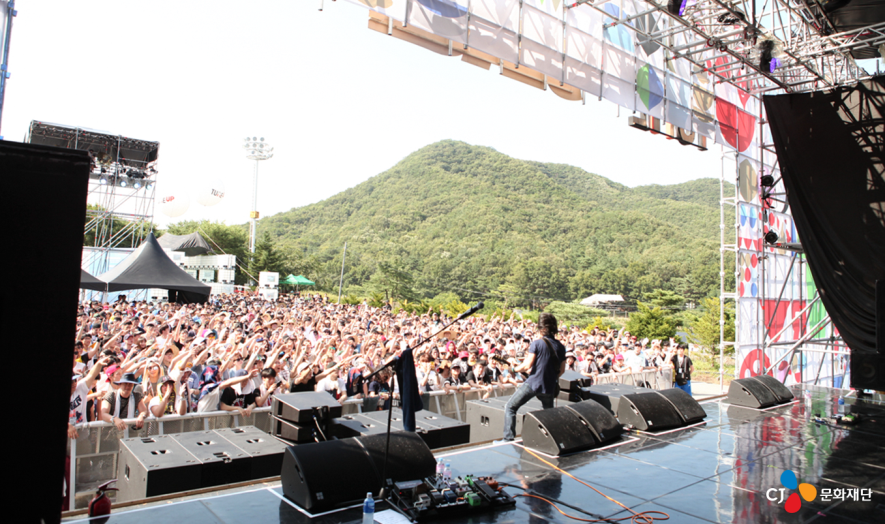 Now let's go see how the two 'rock spirit' teams looked from backstage. Nametag gave an amazing stage presence that made the audience forget about the heat wave. The fever they created was felt vividly backstage as well. Harry Big Button united their audience with their powerful performance. The audience all enjoyed the stage performances with open arms and outstretched hands. Who knew that Harry Big Button had such charisma?

Now let's see the Tune Up Superband that lit up the night of the Tune Up Stage on the second day. Consisting of seven Tune Up teams, the Tune Up Superband presented a stage dedicated to certain musicians, including Prince Rogers Nelson and Shin Hae-Chul. They successfully capped off the finale on the stage with a song everyone can enjoy and fantastic performance. It was a show created by both the stage and the enthusiastic audience. "With many teams working together, we had to practice day and night on a tight schedule over two months. And I am so happy that our efforts paid off today." - Ryu Jeong-Heon, guitarist of CoreMagazine "No musician is ever fully satisfied with their performance. But I guess a wrap-up party tonight will make up for it!" - Mahogany King

After the wrap-up party, the Tune Up musicians left to enjoy the music of other bands, and the Valley Rock Festival came to an end. 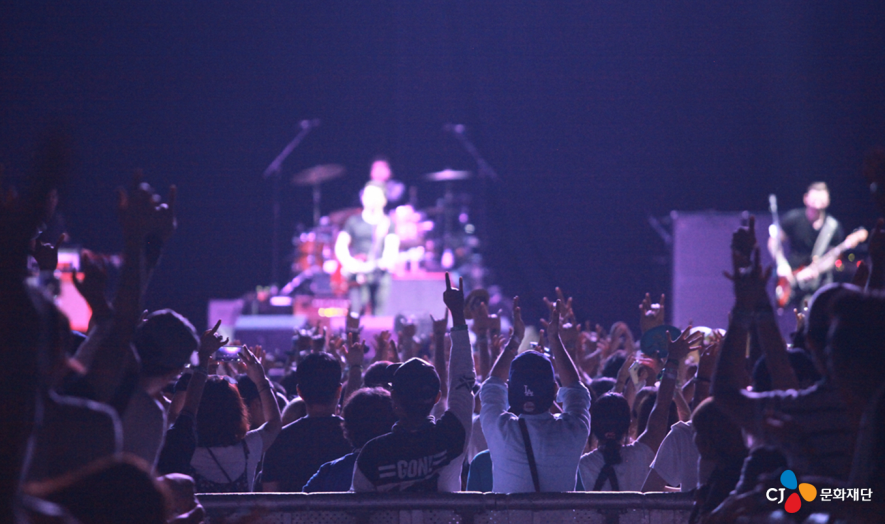 The clean nature, hot sun, gorgeous lighting, intense beats and passionate audience! All these combined to help realize one of the best festivals - 2016 Jisan Valley Rock Music & Arts Festival. The Valley Rock Festival is evolving every year, and I can't wait for the next year! CJ Culture Foundation looks forward to your ongoing support for the Valley Rock Festival!