Children who dream of Sing Street

Children who dream of Sing Street,
one of the masterpieces of John Carney
(detailed story included) 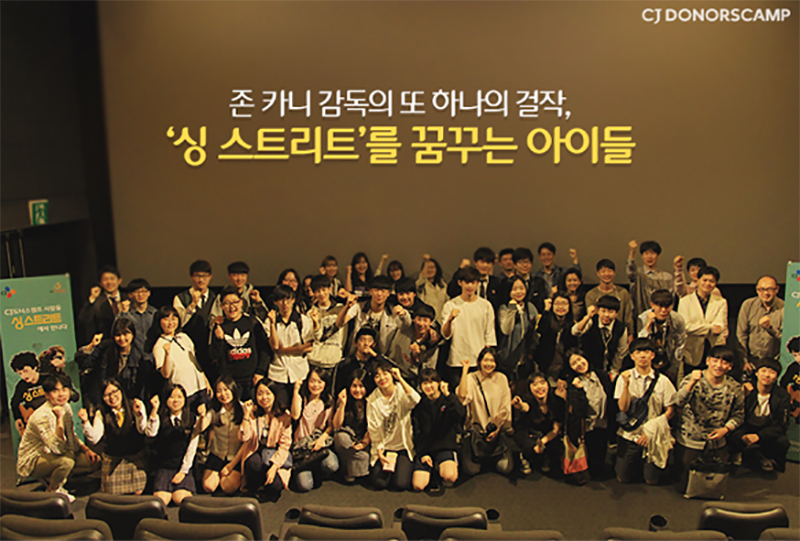 Arguably the most significant moment of the 2008 Academy Awards was not the Best Picture-winning “No Country for Old Men”, nor when Marion Cotillard won the Best Actress award for her portrayal of legendary singer Edith Piaf in “La Vie en Rose”. It was the award of Best Original Song to “Once”, an Irish movie which beat Hollywood-made films.

The movie, which has a running time of 86 minutes, fascinated the Academy, is making new history in the indie music film industry. Moreover, John Carney, director and screenwriter of the film, became a star in his own right. His follow-up film “Begin Again” released in 2014 also went on to gain popularity. This has led Carney to be called as a master of music movies, with legions of fans worldwide, but particularly in Korea.

His latest film “Sing Street” looks set to build on the success of those two films, with its upcoming release in Korea.

The first love with a girl met in a new school, and the band he started to impress her.

Expectations for the movie are high, with its story reminiscent of students' efforts to achieve dreams through music in CJ Donors Camp's Dream Building Creativity School and Dream Building M Junior

That is why CJ Donors Camp invited approximately 60 teenagers as well as mentors of the music sector, CJ employee volunteers and supporters of  CJ Donors Camp Facebook to enjoy a special preview of "Sing Street"

The story of "Sing Street" is one of young dreams, love and youth 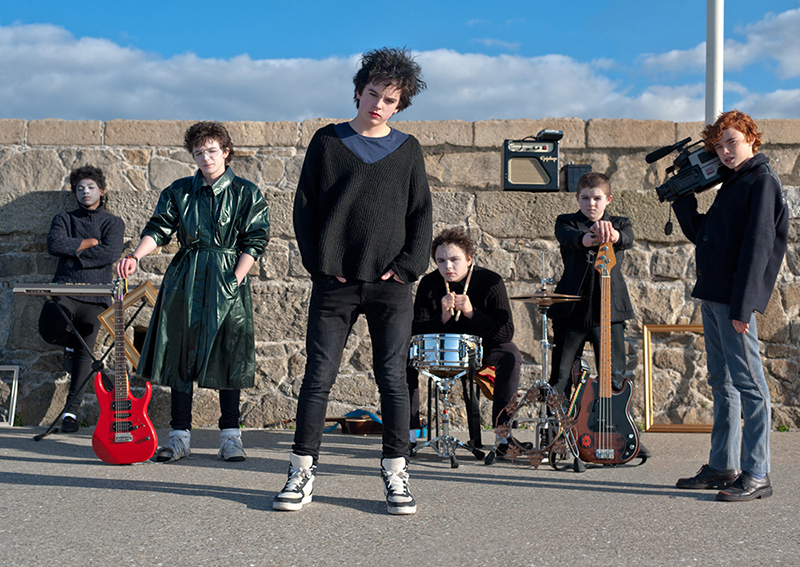 Can you guess the story of the film by the caption above? (Spoiler alert: skip the paragraphs below if you want to go to the movie without knowing the background to the story.)

“Sing Street” is set in Dublin, 1985. The movie shows how Ireland’s poor economic situation at that time compelled many youngsters to move to the United Kingdom for a better future. The family of the main protagonist, Conor, struggles with financial troubles after his father loses his job. His father finally decides to move Conor to a lower fee-paying school.

Conor falls in love at first sight with Raphina, who looks like a model in front of the school. Conor tries to impress Raphina by telling her that he needs a model for a music video that his band is making.

Raphina willingly agrees, so Conor hurries to form a band named ‘Sing Street’ with his friends. The band ends up making songs and a music video together. The more Conor loves her, the better the songs that the band comes up with. An opportunity finally arises for the band to play live. 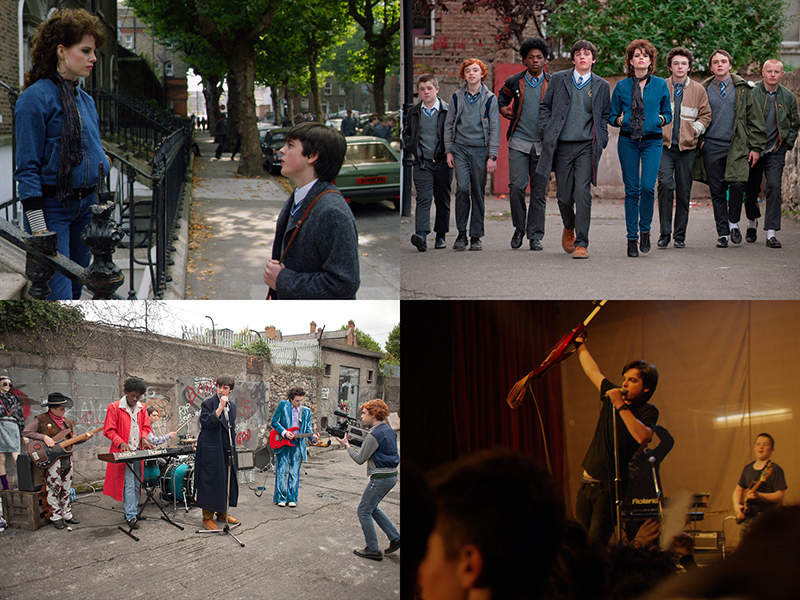 In the movie, Raphina wonders what genre Conor’s music is, and he quips that “I’m a futurist.”

Conor and his friends grow closer, improve their futurism-inspired music, and cement their friendship by playing in a band. The reality around them, however, remains harsh.

Conor’s home, which should be a warm nest, is still disrupted by his parents fighting, and his brother, while a good mentor, hides himself away at home. School is also not a safe place. It is filled with violence by the school principal and disorderly students. Raphina, who stars in the music video, looks to a future in London, just as others in Ireland.

Like the gloomy future expected for Ireland back then, the future of Conor and his friends also looks grim and unstable. Conor, though, moves toward the future through music. In this regard, despite its background in the 1980s, “Sing Street” seems to be future-oriented.

Reply to golden oldies from the 80s in the preview Since teenagers who love and dream of a music career also took part in the preview, a message board was set up onsite to share supportive messages. The theme of the board was “For the first music we face, support our challenges for our dream!”

In addition, a short video of teenagers making efforts to fulfil their dream of a music career by practicing singing and dancing was unveiled prior to the movie. Right after that, they appeared on stage. All these events helped visitors to have a memorable time.

Pop songs from the 1980s could have been as old-fashioned and strange by students of Dream Building Creativity School and Dream Building M Junior. After the preview, however, they said that they liked the music, with some students wanting to buy the film’s original soundtrack album.

For 106 minutes, Jon Carney provided us with happiness through the pop songs of the 1980s, including bands such as Duran Duran, A-ha and The Clash.

All told, music is a strong bridge that connects people regardless of generation, country and race. 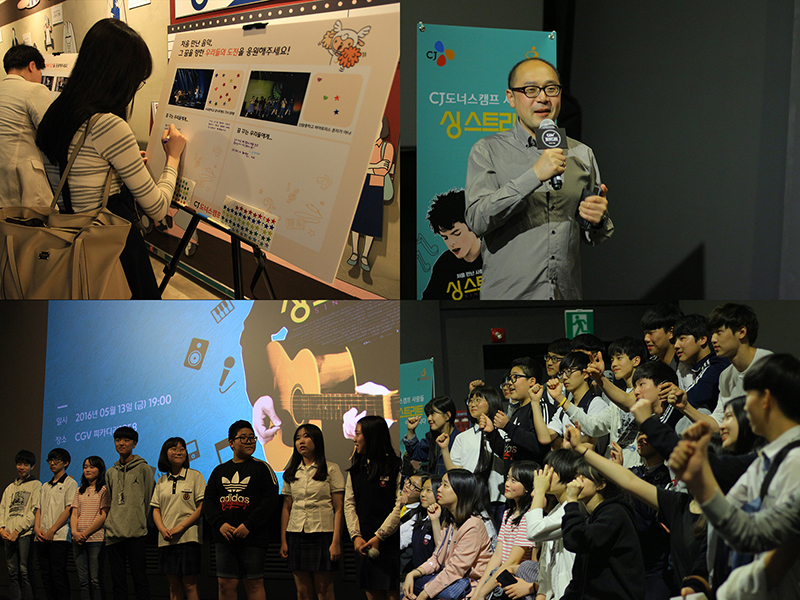 The preview of “Sing Street” hosted by CJ Donors Camp for aspiring musicians was a resounding success.

Given that it is not that all of you who were invited to the preview, how about going to a close theater with good friends to feel the happiness of youth and classic pop?

“Sing Street” is a strong recommendation from the person in charge of CJ Donors Camp blog. See it; you won’t regret!

Next
CJ donates gifts to more than 4,000 study-room tea