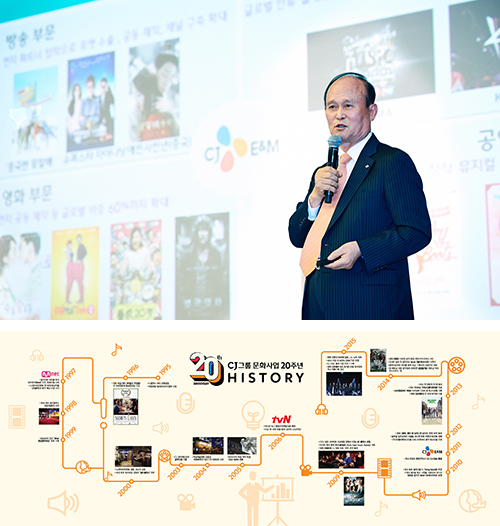 CJ Group (Chairman Lee Jae-Hyun) announced a blueprint for its culture business sector. As part of the blueprint, the group aims to become one of top 10 global companies by 2020 and improve the national brand through the industrialization of Hallyu (Korean Wave).

CJ Group announced the vision and global strategy of its culture business sector for 2020 during the ‘Media Seminar’ at CJ HumanVille in Pil-dong, Jung-gu, Seoul on September 2. The event was a chance to examine the importance of the culture industry for the national economy and the past twenty-year growth of the CJ Group and to outline the new vision for the Group. CJ Company CEO Lee Chae-Wook presented the vision with other directors of the management in attendance at this momentous event for the company.

The plan is to achieve a four-fold increase in the sales of CJ’s culture business affiliates, including CJ E&M, CGV, and Hello Vision, by 2020 from its current level of 3.6 trillion won, thus placing the group among the top 10 global companies. The 2020 sales of the world’s number one culture company Comcast is expected to reach 87.5 trillion won, with Walt Disney in second place at 69.2 trillion won.

To this end, CJ Group has established an aggressive strategy for its overseas business.
CJ CGV plans to expand its number of screens from the current level of 1,637 in six countries (namely Korea, US, China, Vietnam, Indonesia, and Myanmar) to 10,000 across twelve countries around the world by 2020. The key element of this strategy is to increase the share of overseas business to 80 percent of the total targeted screens and 65 percent of total sales, which would transform CJ CGV into a truly global multiplex. As part of the 2020 vision, the number of annual CGV audience is projected to increase to 700 million from the current 130 million, making CGV a top-class global multiplex accounting for 8 percent of the global movie audience (cf. No. 1 theater in 2014 was Wanda Cinema, with an audience share of 3.5% of the world’s total). CGV sees its future as a K-movie platform bringing Korean movies to the world.

CJ E&M has set itself the goal of growing as a global total contents company by developing contents that are well-loved by foreigners and focusing on obtaining global IP (intellectual property rights). As part of the plan for its movie business, CJ E&M will expand the production and distribution of films co-produced with China and Southeast Asian countries. The number of co-produced films with four countries, including China, Vietnam, Indonesia, and Thailand, is approximately eight per year, which represents 15 percent of total film sales. CJ E&M’s movie business sector plans to increase the number of co-produced films and grow its share of global sales to 60 percent by 2020. The ultimate goal is to change its current sales structure to better support the stronger growth of overseas sales relative to domestic sales. For its media business, CJ E&M plans to enter various markets through cooperation with overseas media partners. For its music and live entertainment business, it will accelerate its path overseas by expanding local and global intellectual property rights.

Miss Granny, which was remade in China and Vietnam, and the hit Korean musical Finding Mr. Destiny which was remade as both a book and movie in China and Japan are prime examples of the OSMU strategy. As part of this OSMU strategy, CJ E&M aims to raise its share of global sales from 8.5 percent to 43 percent by 2020. It also plans to grow the scale of KCON and MAMA, which play a pivotal role as platforms for Hallyu, and expand the regions where these events are held, while still bolstering support for small and medium-sized domestic businesses to explore paths for overseas sales.

The starting point of the CJ Group’s culture business was its 300 million dollar-investment (appx. 350 billion won) in DreamWorks in 1995. This represented an enormous amount of investment which exceeded 20 percent of CheilJedang’s annual sales at the time. However, Chairman Lee Jae-Hyun pushed ahead with the investment decision despite the opposition by management as he firmly believed that ‘Culture is our future’ and has continued with this investment strategy to market and globalize the culture business for the past 20 years. A spokesperson from CJ Group said, “It would have been impossible to transform the food company CheilJedang into today’s global cultural creation company ? achieving in the process almost a second foundation of a company - if it were not for the strong commitment of top management.”